We’re living through a bit of a DIY renaissance. From beer to bacon, men are teaching themselves how to scratch-make things that until very recently they were pulling off shelves in neat, shrink-wrapped packages.

But before this was on my mind, it was on my head. For some years I’ve been having my hair cut by one Van Capizzano. Van’s been trimming manes over two decades at spots like Freeman’s Sporting Club, Ludlow Blunt and now his very own shop in Boston’s South End, Tribe Barber.

Cuts with Van come with two bonuses: a lengthy foray into rock history (the only reason I know anything about Berlin-era Bowie or pre-Buckingham Fleetwood Mac), and a chance to be his pomade guinea pig. The stuff found in Van’s unmarked cylinders is thick, richly scented and powerful enough to provide hold the following day, without being greasy or shiny.

After my first few sessions with Van, I quickly became interested in just how he achieved this hair care alchemy. Cause hell, if you can brew a perfectly acceptable IPA at home, why stop there? Turns out, Capizzano has been after the perfect salve much of his career. “I was always studying every product and pomade—what was in it, what the various ingredients were supposed to do, and where they came from originally.” Van continues, “Then I started chasing those things down for myself, trying to figure out the best combination.”

“I was always studying…what was in it, what the various ingredients were supposed to do, and where they came from originally.” 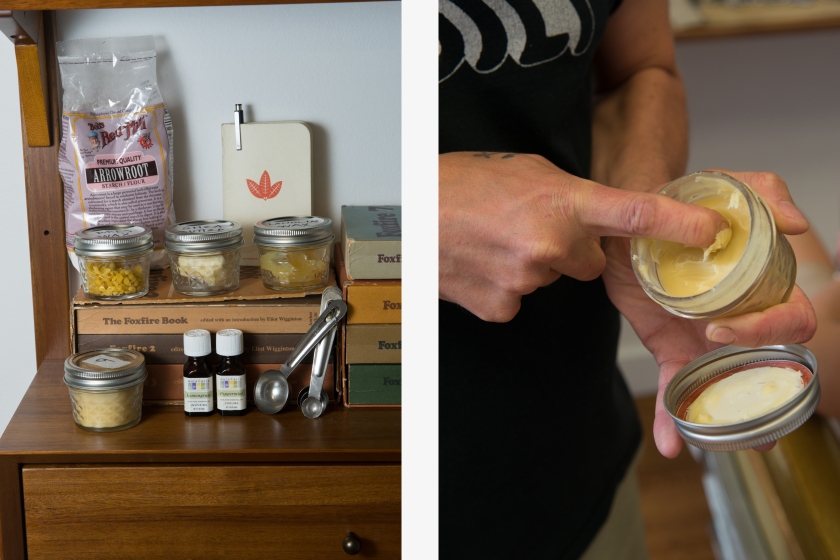 He began actively experimenting two years ago and since then he’s produced 10 batches, making 6-9 ounces at a time that he stores at home in mason jars. Though there’ve been some notable successes (batches nine and seven) and disappointments (batch eight), all were made using the same four ingredients. And for scent, Van simply adds a few drops of lemongrass and peppermint oil because—well, that’s just the kinda smell he likes. While the process behind his process may be nuanced, Van’s recipe is surprisingly easy to replicate at home…

Of course, even the most successful batch is useless without proper application. So I got into the chair at Tribe for a hands-on tutorial from the maker. Van begins with a fingernail-sized scoop of the dense pomade, “the product is so thick, you’ve got to really heat it up,” Van says, rubbing his palms together as if trying to start fire by friction. “You want to get it as hot as you can, because that’s going to break it down…my hands are burning right now. Literally burning.”

Once the product is sufficiently warmed (and Van’s hands are no longer a fire risk), he begins to work it into my dry hair; from the tip of each strand, to the root and back again. “You don’t want to put this into wet hair, it’s essentially oil and water—and [they] don’t mix so well.” 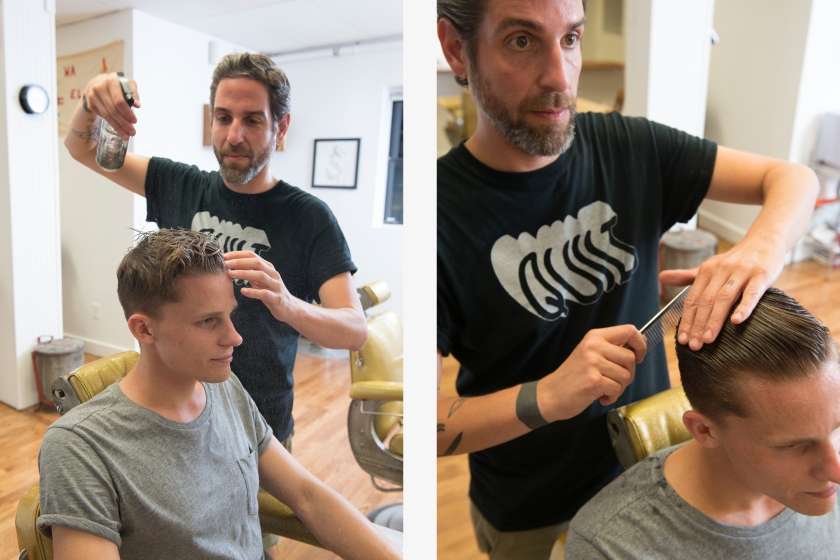 But after I’m thoroughly pomade-ed, a light mist is key. Van breaks out a water bottle with a spray attachment and begins spritzing, prepping my hair for the actual combing. “I normally go back, then I go forward and then I go sideways,” says Van as he neatly partitions my hair into formation with a heavy-weight metal comb.

“I want to affect direction, I don’t want to force it.”

When it comes to quelling the hated cowlick or rebellious follicle, Van has some simple wisdom to share: “First I go where the hair wants to go. Whether or not I finish there doesn’t matter…I want to affect direction, I don’t want to force it.”  I stand from the chair and consider myself in the mirror. Handsome devil. Not a hair out of place.

Somewhere out there, an Alfalfa just got his wings.