Admittedly, the idea wasn’t exactly groundbreaking. A mysterious visitor arrives on Earth, meets a young boy, and they explore a small corner of the world together. Steven Spielberg did it in E.T., of course (our “alien” even emerges from the closet dressed up in incongruous clothes-more of full-body salutation to Spielberg’s film than a nod), and that was 35 (!) years ago.

What was different was that this was a film-fine, an ad-for a grooming company, a category where marketing efforts typically revolve around Fight Club torsos, Chris Pine jawlines, and Emily Ratajkowski girlfriends. And what was even more unusual was that our lambent visitor was challenging the very stereotypes upon which those ads were built. As “A Man Like You” progresses and the boy tries to teach his new friend about being a man, he learns that the rules of masculinity that he understood to be true-men should be strong, know about cars, walk with confidence, and so on-are not rules at all. So far, so straightforward, you’d think, especially to the adults among us. And yet.

At a time when pervasive, harmful stereotypes in advertising are under exceptional scrutiny, now thankfully banned in the U.K. by the Committee for Advertising Practice following a review by the Advertising Standards Authority last summer, our film, which explicitly calls out male gender stereotypes, has sparked breathless conversations online. Comments cover both sides of the spectrum: “Beautiful. It shows you don’t have to be a macho asshole to be a man,” one YouTuber posted, while another declared the video “Soyboy propaganda.” Over at Harry’s Towers, we’re thrilled that “A Man Like You” has provoked so much debate because the question it asks-What does it mean to be a man today?-is at the heart of our identity as a company. Which is to say, it’s the fulcrum of everything we do. And which is most certainly not to say that we’ve figured it out. Far from it.

But we do know some things. That the idea that a man has to be the breadwinner, be in control, be stalwart, is as outdated as the idea that a woman should be nurturing, modest, empathetic. And the fact that even writing the last clause of that sentence is painful should be testament to the fact that it’s time for brands, for advertising, to catch up with society: masculinity is messy and complex and it deserves to be treated with fine-pointed nuance, not with the broad strokes that lead to caricatures which in turn lead to, in the worst cases, domestic violence and suicide (on average, men die by suicide 3.5 times more than women). As Ella Smillie, a regulatory policy executive at the Committee for Advertising Practice put it: “Some gender stereotypes in ads can contribute to harm for adults and children by limiting how people see themselves, how others see them, and potentially restrict the life decisions they take.”

When you think about it, it’s no surprise that gender stereotypes, in advertising as in life, are limiting: They’re not based on a reality that most of us can identify with. But the problem is, we’re not thinking about it enough. All day, every day, we’re confronted with stereotypes large and small, subtle and overt: in the media, in entertainment, in advertising, in politics. It’s a normalization of extremes that can allow “micro aggressions” to become actual aggressions, and which gives rise to the kind of environment where “locker room talk” becomes permissible and sexual harassment becomes institutionalized. We must, now more than ever, do better. 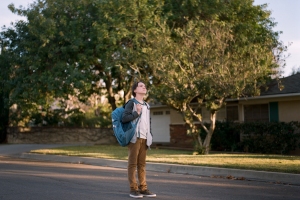 This is not to advocate for an abnegation of traditional male “virtues.” Strength, chivalry, responsibility, courtesy… such things must not cease to be considered good and important. There’s nothing wrong with being chivalrous any more than there’s anything wrong with being strong, or with liking sports or, yes, cars. But our opinion is that you can be chivalrous and nurturing, strong and vulnerable. As men, our identities are made up of what are presented to us, from childhood, as opposing forces: be masculine, not feminine. Be tough, not weak. Be this, not that. The key, the future even, is in the balance.

For Harry’s, this film is the most substantial incarnation of a brand positioning almost two years in the making. Led by our VP of Marketing, Lorna Peters, and supported by the entire company, especially our co-CEOs and co-founders, Jeff Raider and Andy Katz-Mayfield, we have conducted hours of interviews with real guys across the U.K. and the U.S. and have arrived at a place which, we believe, reflects the reality of our customer and his values. With the help of the Austin, Texas-based creative agency GSD&M, especially the creative directors Dale Austin and Brandon Curl, our design director Mickey Pangilinan, our senior director of brand and innovation, Leah Hoxie, our director of consumer insights, Todd Adrian, and lots of other people there’s no room to name, we pushed to do something different and we’re proud to see it out in the world, catalyzing conversations. (It’s worth noting that the ad was banned in the U.K., after failing to meet unrelated Clearcast requirements. Next time, I guess.)

We’re not claiming to blaze a trail here. We recognize the amazing work being done by men and women around the world on the topic and we’re delighted to be contributing to a conversation that has been percolating for years and that now seems to be getting louder by the day. Eight years ago, at a TEDWomen conference, educator, activist, and author Tony Porter, in his now-famous talk “A Call to Men” identified a “Man Box,” in which, he said, men are trapped. He ends his rousing 10-minute call to action like this: “I said to a nine-year-old boy, ‘What would life would be like if you didn’t have to adhere to this man box?’ And he said to me, ‘I would be free.'”

The other night, we were lucky enough to host Tony Porter on a panel we hosted in New York City with the Washington Post, where the question “What does it mean to be a man?” was debated. It was a lively, interesting discussion but you couldn’t help but notice that Porter looked decidedly weary. He’s been saying this stuff-to the NFL, the NHL, the MLS, the MLB, the military, and many other groups for almost a decade. It’s time we all started listening.

A version of this article was published first on It’s Nice That.