It’s a Friday morning in Los Angeles, and Justin Baldoni’s house is bustling with activity. Disney’s Moana plays on a flatscreen in the living room, which is peppered with blankets, toys, and children’s books. The smell of pancakes wafts from the kitchen, where his wife Emily flips flapjacks for their two-and-a-half-year-old daughter Maiya. The towheaded toddler, clutching a stuffed bear named Teddy, gleefully pushes a large purple plastic ball up and down a hallway.

On the couch, Baldoni, the 33-year-old director, producer, and actor best known for his starring role as reformed playboy Rafael Solano on The CW show Jane the Virgin, cradles his sleeping newborn son, Maxwell. Though he plays a father of three on TV, he exudes a gentle and serene confidence that sets him apart from his onscreen character. It’s a confidence that seems partly inherent and mostly hard-earned.

Justin Baldoni with wife and daughter.

“My earliest memories as I relate to other kids or boys are feeling sad and rejected. Feeling like I wasn’t enough. I remember from a very young age of being sensitive, and using vocabulary that I’m not sure made me ‘one of the boys,’ like ‘that hurts,’” Baldoni says.

“That’s where [the idea of] masculinity started, this idea of wanting to be a part of something.”

“I was mad at my dad because he wasn’t like other dads. My dad didn’t teach me how to do manly stuff,” Baldoni says. “In reality, he was extremely masculine because he taught me how to use my heart. He’s kind, he’s happy, he treats my mom with amazing respect. He’s extremely humble. He was always there for me. That’s what I think it means to be a man.” 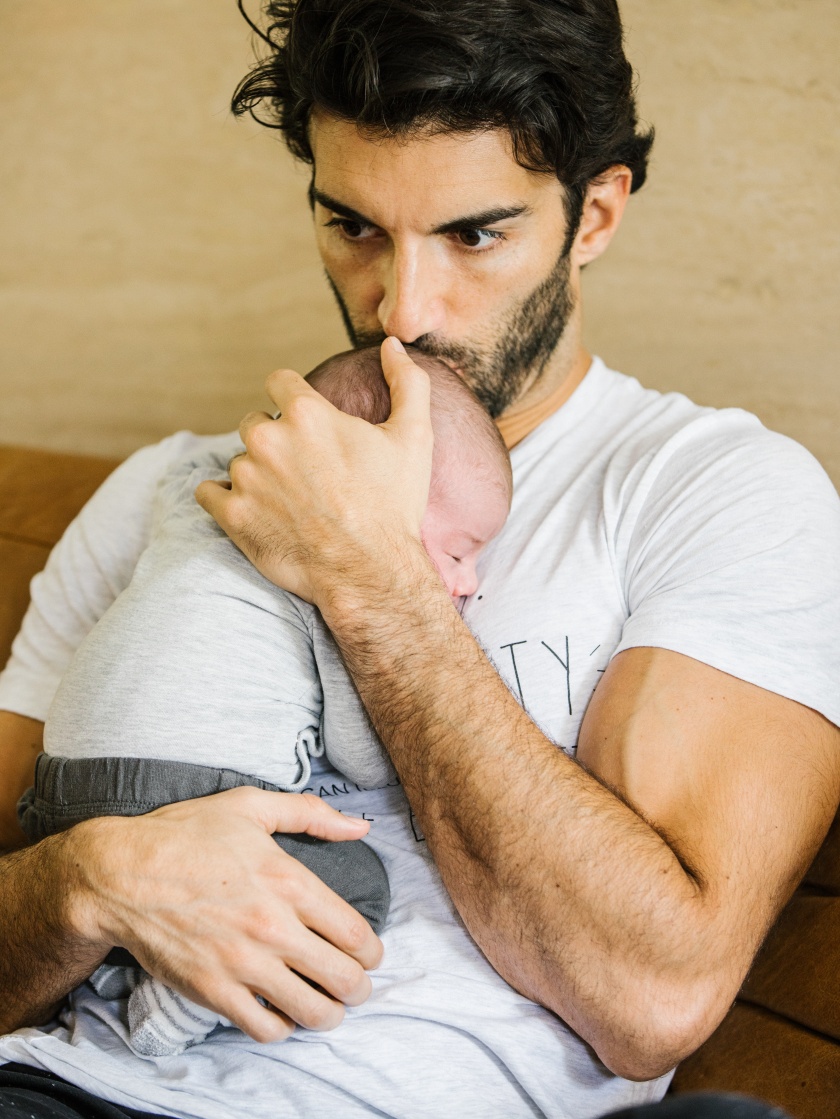 The question of what it means to be a man is the central thesis behind Baldoni’s new series Man Enough. To help him explore the concept, Baldoni gathers celebrity friends, including Dancing with the Stars’ Derek Hough, Hamilton star Javier Muñoz, actor Matt McGorry, satirist Bassem Youssef, and rapper Prince Ea, around a dinner table where they discuss issues men rarely speak about in public, from body image and sexuality to happiness and fatherhood. The show’s format, while convivial, already addresses one of the challenges men face head-on.

“The feedback from men is always positive when it’s one-on-one. It’s open and receptive. It’s, ‘This is great. I need this,’” he explains. “If there’s a group of men, it’s harder. No one is willing to admit in front of each other because then we give up our status… We have a hard time showing how we’re feeling, showing our vulnerability, showing our weakness, especially around each other. And that’s a problem. And if I’m having the issue and I’m aware of it, so many men are not aware of it. Most men don’t even think it’s a problem.”

Baldoni hopes that showcasing men from all walks of life who are willing to broach sensitive topics around other men will inspire male viewers to have those same conversations with men in their lives.

“As men, we don’t like being told what’s wrong with us. We don’t want to be told that there’s something that needs to be fixed,”

“I don’t want to tell men that they’re broken. I don’t think men are broken… It’s about trying to build real relationships that aren’t always about alcohol or sports or politics. Can you go a step deeper in your conversations with other men and get to know another person?”

Baldoni is no stranger to initiating difficult conversations. In his early 20s, he gave up acting to form his production company, Wayfarer Entertainment, which he used to direct and produce the docuseries My Last Days. The series, which aired on YouTube and The CW, followed six young people diagnosed with terminal diseases and captured how each person chose to spend their last months of life.

“This process of exploring learning how to live through the dying really helped break me open. I learned I had far less to lose than I realized,” says Baldoni. “It helped me shed the stuff I built up and have real conversations. It makes you look at your life like, if I had 6 months left, what would I be doing? So much of what I wasn’t doing was because I was stuck behind this mask of masculinity.”

Landing the role on Jane the Virgin, getting married, and becoming a father not only further propelled Baldoni to pursue his personal journey of redefining masculinity, but also encouraged him to share it publicly and engage other men in the process.

“It’s not a journey you have to do alone. There’s no chance I would be a man who is trying to break through if it were not for [my wife] holding the space for my vulnerability. Emily and I both believe it’s so important to raise our children as not just tough boys or sweet pretty girls, but as good humans. We have to really be honest with ourselves.”

Baldoni began to use his Instagram account, which now boasts one million followers, as a platform to practice vulnerability and engage in conversations with men around the country and globe. So far, the discussions he’s had with men in his DMs have convinced him that Man Enough is launching at the right time and will have an impact.

“I believe in starting small. If men watch Man Enough and go, ‘oh that’s like me,’ then we’re doing our job. I hope Man Enough is the beginning of a larger conversation that leads to action.

I hope that it inspires men to try and to talk. I hope that it shows that you can be masculine but also vulnerable. I hope it gets us all thinking about what masculinity even means. I hope it wakes men up.”

Man Enough is a series created in partnership with Harry’s, check out the episodes and learn more here.