Playboy-turned-family-rights-activist, and former Editor of Loaded Magazine, explores the evolution of masculinity in Britain and beyond. Talking candidly about the sex-fueled 90s subculture he once helped propagate, and the progressive movement he’s now working to create.

We head out just after dawn one Friday morning to join Martin in his Dulwich home, a short drive from central London. Just a few years ago, this suburban utopia would have looked jarring on the hard-partying editor, whose traded in his late nights for early playtime with his two children, seven-year-old Sonny and two-year old Dolly.

“Interestingly, I met [my wife] Diana while working in a party at the Sun. We had the biggest selling newspaper in the UK, and it was basically a breast sale on-page. But this was a normal part of everyday British society.”

“When I was at Loaded Magazine I was accused of being a misogynist which struck me as absurd. I mean for starters, the girls were very well paid, and they did it at their own vocation. It wasn’t pornography by any definition, and it was accepted by even the very-top of society: pop stars, movie stars. the royal family, even Prince Harry used to buy Loaded.”

“If you go back in time to the mid-1990s, the Lads [the men consuming this content] also had a female counterpart called Ladettes, and the biggest media figures on TV and in mainstream culture were Ladettes. It was seen as something to be celebrated, it was girl power. Women found it empowering to do what men had done for generations. Why can’t women get drunk? Why can’t women have casual sexual encounters? Why can’t women wear what they want? Why can’t women do what they want with their lives? This was seen as a celebration, because it celebrated their sexuality, it became a feminist thing.”

“And then suddenly it all fled, the backdrop flipped. As gender politics came more to the forefront, the magazines were seen as part of a broader kind of objectification of women. Along with the pornification happening in pop videos, mainstream media, then the internet media—there was a great deal of anger emerging against the sexualization of women. Something that was once celebrated became denigrated overnight, and publications like Loaded became a convenient scapegoat.” 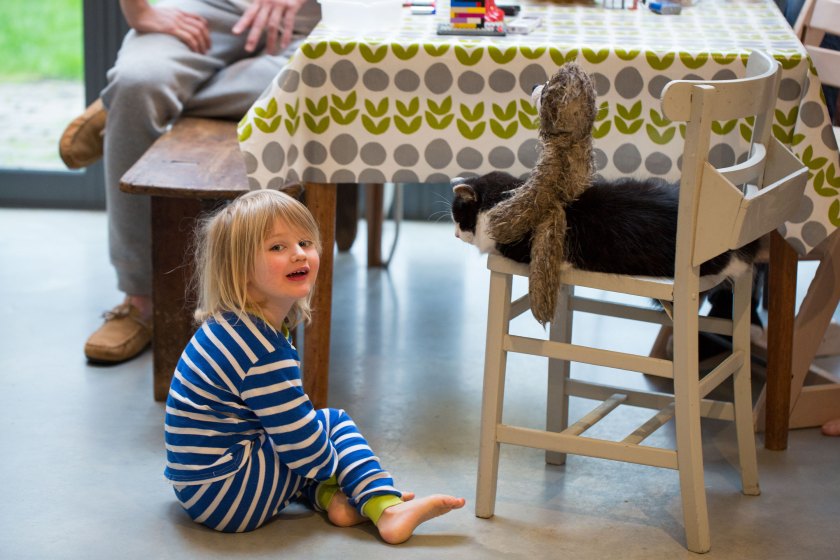 “Being a dad, I thought my job was to provide. As far as I knew, bringing up kids was mother’s work.”

In the midst of this cultural shift, and grappling with the evolving constructs of traditional gender roles, Daubney found himself married with a new-born baby boy. “That was May 2009. The first six months of Sonny’s life were extremely hard. He had a very difficult birth, Di had a seizure and they had to give her a C-section. Nothing prepared us. When we got back home, we both broke down, and in many ways, it was like the beginning of like my life. Everything before that I’d just been facile.”

“Being a dad, I thought my job was to provide. As far as I knew, bringing up kids was mother’s work. My mum was a stay at home mum, and my dad was a coal miner. He never changed a nappy in his life. He worked 16 hours a day, and Monday-Friday he was either at work or asleep. In my binary mind, at this point, I was just used to that method of masculinity—of just getting on with it. And, particularly because of what happened with the delivery, it was easier to give somebody else control, because the birth was something that was very out control. And men are masters of control; at least we like to fool ourselves we are.” 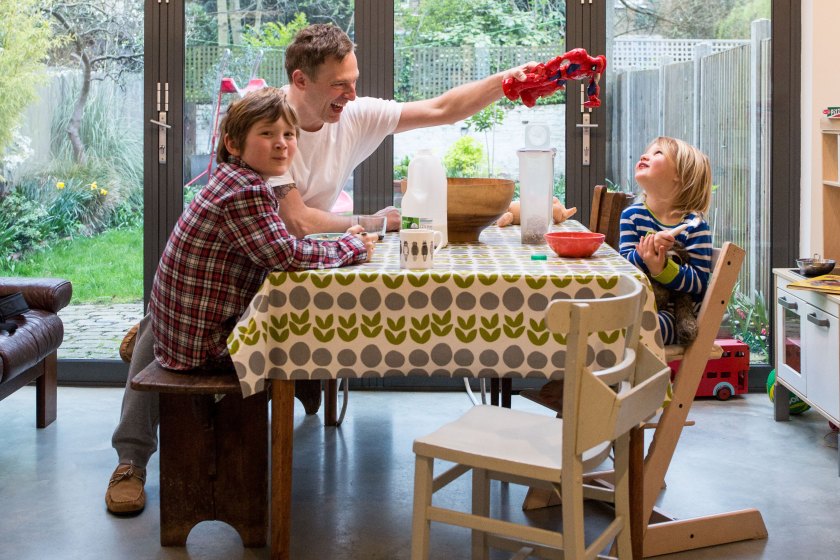 “Over the next six months I carried on as normal, working late—but I knew Di was also going through a tough time. It came to a point where I knew I was being an absent partner. I was missing bath times all the time, and would think ‘well, I always miss it, so I’ll just stay out a bit.’ My lifestyle revolved around socializing in pubs: we worked hard, we played hard, we met clients, we met celebrity agents—and it was disastrous for my relationship with my family.”

“It came to a point where I knew I was being an absent partner.”

“The net outcome was I realized that the modus operandi I had as a man was outdated, and I had to change. So, when he was six months old we moved out here, and when he was one, I quit the job. Overnight I went from managing 30 people and millions of pounds of budgets to being in charge of Sonny, and it was harder. It was the hardest thing I’d ever done.”

“Di went back to work, so our roles completely flipped. I became the parenting partner, and she was the bread winner. It was difficult because I realized I was more like my mum than my dad and that was very challenging for somebody who’d been brought up in a very old-fashioned, traditional gender-role environment. Suddenly I was the opposite. And it was also hard because there weren’t many men around, it was all mums. I’d go to a play group, or take him swimming, or go to the family changing room, and I’d be the only bloke. I wasn’t prepared for this world.”

“If you walk around London now, you see a lot of guys pushing buggies, but eight years ago it wasn’t like that. It was noteworthy, ‘Oh wow, you are a guy, oh well done.’ And I thought, ‘What do you mean well done?’ It’s just a job that needs doing. Mums don’t get high fives. In fact, we were going through a period where the role of stay-at-home mum was being very denigrated by the media. It was seen as a non-feminist thing to do. Stay-at-home dads were being celebrated where mums were being mocked.”

“I went from managing 30 people and millions of pounds of budgets, to being in charge of him, and it was harder. It was the hardest thing I’d ever done.”

“In many ways, we’ve fooled ourselves into thinking we’ve moved on as a society, but really, we’re still stuck in the 1970s. Parenting is still seen as women’s work. It’s a psychological thing, engrained in our collective psyche. Even though some progress has been made, we still have a lot more barriers to break.” 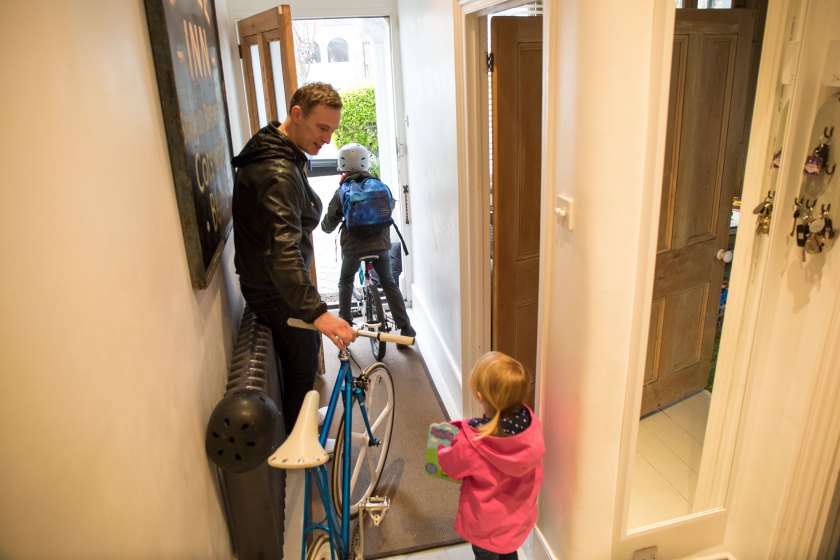 “But it’s got to start somewhere. We need to make a societal switch I think, from viewing men in the role of provider to the role of caregiver. Hopefully by more dads being hands-on, the next generation will think that’s natural and they’ll just do it without thinking. I think that’s when we will start to see the victory.”