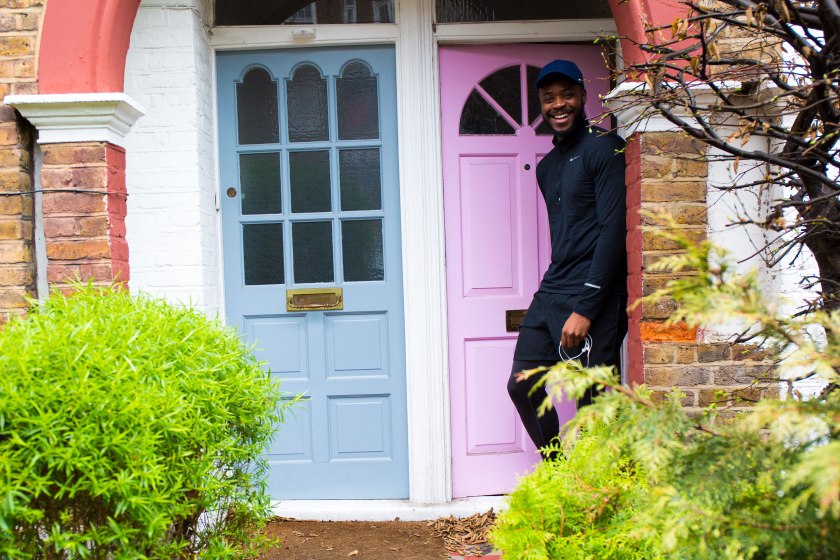 Ten miles outside central London, in the modest suburb of Chiswick, you’ll find the home of Yinka Illori. Humble and inviting in its disarray, Yinka shares the three-bedroom townhouse with his sister and her boyfriend, also artists and makers in their own right.

His warm smile and bright eyes invite us into the front room, laden with bright African prints and more than a dozen chairs. Though, they’re not made to sit on, “Well metaphorically you can. They have four legs.”

This is Illori’s medium: rescuing forgotten chairs from curbs and second-hand shops throughout West London, and reimagining them into sculptures inspired by African Parables. “I sort of feel like we take them for granted at times, in that they’re there to make us feel comfortable. We trust them to support us without question. But if you’ve ever sat in a broken chair it’s surprising, almost horrifying for a moment when it begins to tilt or give way.”

“If we look at this bench you’re sitting on, maybe 50 people have sat there, maybe more, and they’ve had discussions—personal things, work-related things—well, what if we could see all the thoughts of that bench? It could be quite powerful.”

“I don’t want to rework it too much. I’ll keep some of its original components, because they’re part of the chair’s narrative. They all have journeys. What’s nice is trying to unravel it, then infusing my own perspective. Then if we look forward, someone buys this chair, and part of them imparts as well. It becomes an ongoing story.”

“I sort of feel like we take them for granted at times…We trust them to support us without question.”

To hear him speak about the inspiration of each piece is to hear him recall vivid memories of his childhood. English-born and of Nigerian-decent, he was raised by conservative parents in a deeply religious household. Growing up, he felt conflicted with the culture of his home life and the diverse communities surrounding him. “I grew up in house that was very strict and tradition was very important to us. We had to speak the language; we had to eat with our hands. They wanted us to really embrace our culture, and forget about being born in London. Because sometimes we use that as an excuse for bad behavior.”

The Dutch-waxed fabrics Yinka uses as upholstery are the same used to make traditional Nigerian robes. “My parents would work for days to buy fabrics. Nigerians use the colors as a way of showing their identity and their culture. There are a lot of Nigerians who have been in this country for 30 years or more. They left their home, their moms and dads, their cousins, everyone, to give the next generation—myself and my siblings—a better opportunity compared to what they had. The fabrics provide a sense of belonging, a way to keep in touch with their culture.”

“As a child, I found it quite hard to know if I wanted to be British or Nigerian. I knew I loved having an English Breakfast, but I also loved spinach and yams. I was in a constant battle with myself. It wasn’t until after university, and really only now, through my work that I feel at peace. I can be British and Nigerian, enjoy both traditions. I can be my own culture, my own identity.”

“As a child, I found it quite hard to know if I wanted to be British or Nigerian…I was in a constant battle with myself.”

His first collection was built in his parents’ backyard with a 3,000 EUR grant and a handful of tools his father bought him from B&Q. A gamble that would pay off, as just two-years-later he went on to show at London Design with collection called If Chairs Could Talk.

“It was a collection I did in 2015 where I depicted five characters from my childhood. I went to an all-boys school in North London, St. Aloysis. They separated us into X-Band and Y-Band, the X-Band were labeled as intelligent and given the best teachers and resources, and the Y-Band were deemed to have no potential. Most of my friends were put into the Y-Band; they weren’t really given a chance.”

“The first [chair] is called Backbone. One of the boys I went to school with moved from his home country when he was 15 or 16. He didn’t speak English, had an African accent and was bullied because of it. Like most people in that position, he wanted to fit into the cool group, and ended up doing things like cutting school, selling drugs, being destructive in class to be funny. This chair was based on him. If you look at the back, in the middle of the bottom, it’s not where it should be. It’s not comfortable. All these small elements have been moved, they’re in positions you wouldn’t expect. I took key parts of his narrative, and made them depict part of the story. Because he was not comfortable.”

“No matter how long your neck is, you still can’t see the future.”

“Another piece, The Trapped Star, you won’t be able to shoot because it has now been acquired by the Brighton Museum. The piece looked at two brothers, one my age and the other a year older. The younger brother was very intelligent and really good at music, but wanted to be just like his brother, sell drugs, cut school, do things that were not right. He was always stuck between two personalities, either be like his brother or be himself. Often the bad side was more powerful. With this chair, I had two that I brought together. A smaller one, a piano seat, represented his love for music, his light. Then there was this big captain’s chair, it represented who he was supposed to be, even though he never reached his full potential.”

“But then the underlying message behind the whole collection was based on the parable, ‘No matter how long your neck is, you still can’t see the future.’ You know, a giraffe has a long neck but it doesn’t mean it can see 50 years down the line. Most of the boys I mentioned, who these chairs were inspired by, are now doing such good things. They’re doctors and teachers and engineers. Even though they were labeled as failures, and people thought they weren’t going to be successful, they proved them wrong. I suppose the real message, in my own words, is to not judge people, but allow them to become who they are.”