Thirty pounds of cardboard and 90 gallons of glue. That’s what set Scott Newlin on his career path. During a summer architecture class as a high school sophomore in Salt Lake City—where he pored over Frank Lloyd Wright floor plans and designs—he was tasked with building a chair. Out of cardboard. “I have this Polaroid of me sitting in that chair, and I can literally pinpoint that as the moment where I was like, ‘This is what I want to do,’” says the designer, who today is sitting on a relatively simple chair, made from white plastic and metal, in a meeting room at Harry’s SoHo office.

“I can literally pinpoint that as the moment where I was like, ‘This is what I want to do.’” 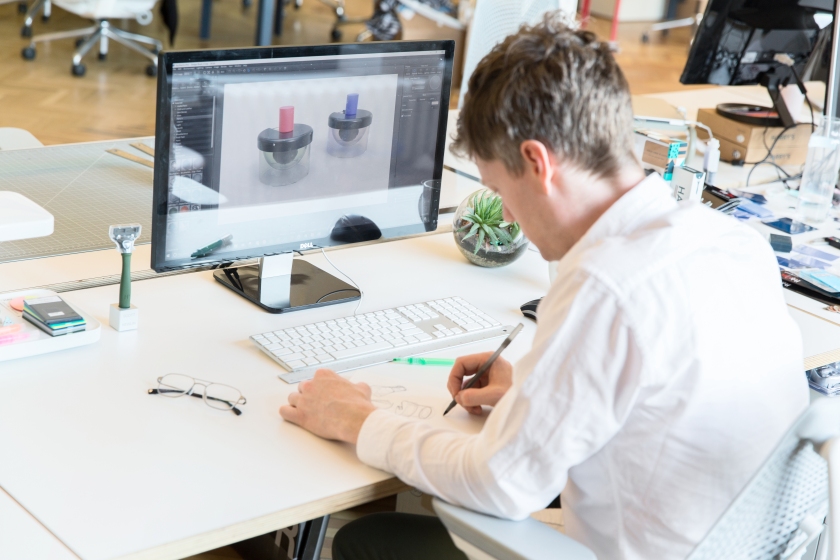 Nearly 20 years later, after designing everything from couches and TVs to soap dispensers and trash cans, he laughs when he realizes his primary medium at Harry’s is the same as it was that fateful summer in Salt Lake. “Full circle!” he says, with a shake of his head. “I can never get away from fluted cardboard.”

As a design director at Harry’s, Newlin is responsible for anything physical that the brand makes. Much of that is cardboard packaging, yes, but it’s also the product, like razor handles, and the spaces—the office, the pop-ups, the in-store displays at Target—and that variety is what he loves most about his job. “It’s not just about razors,” he says. “It’s creating an identity for this brand.”

At Harry’s, Newlin is always trying to find that perfect balance between simple and elevated. “And that’s hard to achieve,” he admits. “Because you can be very simple but then it could feel generic. I want to make sure it still feels special, but we also want to make it really approachable. Modern design can be seen as a little too arty or hip but I feel like we’ve done a pretty good job of bridging that gap, as well—making sure that everything feels like it isn’t too cool for school.” The Harry’s aesthetic reflects his own: “Really simple, not too loud, but kind of fun.” He looks down at his dusty rose button-up shirt and tan pants and grimaces. “Well, I don’t know if that’s how I’d describe my fashion….”

“Really simple, not too loud, but kind of fun.”

Whether he’s designing Harry’s new office (the brand is heading further west in SoHo) or a box for the Winston razor set, Newlin follows the same three-step process: Concept, refine, make. “Though the ‘make’ part gets fuzzy—there are 400 micro steps there,” he says, with a laugh. Where projects differ is in the timeline. While you might assume designing an office is more labor intensive than designing a box, he says it’s the opposite. “You’d be surprised how much it takes for a box to come to life. There are certain things you have to think about when you’re making 14 million of something versus one.”

What Newlin finds most rewarding is how much the consumer cares about design now. “Design is everything,” he says. “I know that’s an overused term now because of the Kardashians, but it’s true. From the music you listen to, to the hat you’re wearing, to the couch you sit on at home, to the programs you watch: design is a lifestyle and it encompasses everything.” 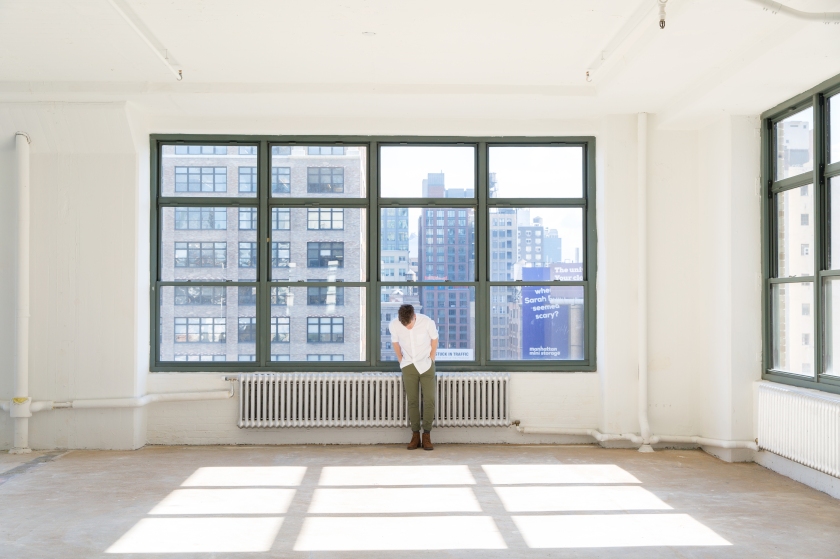 Newlin smiles. “My mom will call me and talk about some design thing she saw, which is crazy. Because when I was in high school and going through that phase, my parents were really supportive, but they had no idea what I was talking about. Now we can have conversations about it. They see it everywhere,” he says, spreading his arms wide. “Everyone is kind of enlightened to how design affects their lives.”