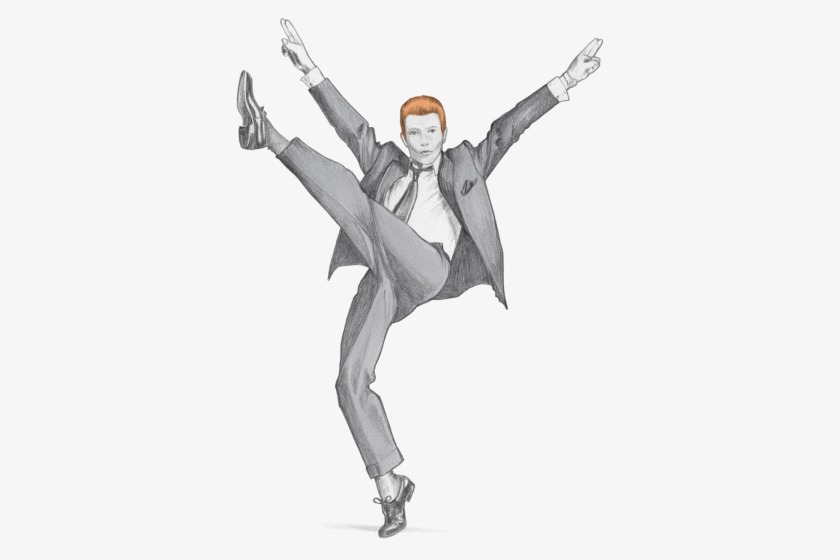 In honor of what would have been his 70th year, Five O’Clock surveys the cinematic significance of David Bowie and the schlockternative movement. Herewith: Part Four of Four…

What was our hero doing between the end of 1985 and the beginning of 1986? Not much. Peeking up the skirt of middle age, getting ready for his 39th birthday. Bowie released two albums in ’86, both soundtracks. For Labyrinth he wrote, performed and produced the album in its entirety, with Trevor Horn. He contributed only three songs to the Absolute Beginners soundtrack—including the title track and a cover of “Volare,” the Italian-language standard popularized by rat-packer Dean Martin. Oh yeah, in January 1986 he also appeared on the cover of Vanity Fair in a pose halfway between the Karate Kid and Fred Astaire. The headline—“Showy Bowie: Hoofing it with Dave”—proves, if nothing else, that rhyming makes good copy.

Labyrinth is a true cult classic, treasured more for its quirks and missteps than in spite of them. Directed by Muppet-Master Jim Henson and produced by Star Warden George Lucas, it’s less an art film and more of a Saturday morning cartoon designed by drugged-out lunatics. Labyrinth is a fairytale cloaked in shadows and mist. Wuthering Heights meets a tampon commercial. In a good way. The soundtrack is disappointing: the sort of bad 80’s pop that sounds like a toothpaste jingle. One exception is the catchy and almost impressively awful “Chilly Down,” a funk-rap number. The couplet “With the mackin’ sex appealin’ / can you dig that groovy feelin’?” is, somehow, not the song’s most riveting or disturbing lyric.

A quest story cobbled together from leftover bits of The Hobbit, Alice in Wonderland and Gremlins, Labyrinth opens with teenage Sarah, played by Jennifer Connelly, moaning about her tortured middle-class life. Mom and Dad just don’t get her. She has to watch her baby brother and everything. Sarah wishes she could escape her life and, in so doing, like a slapstick Faust, inadvertently summons Jareth the Goblin King. Bowie has a truly spectacular look in this role: pirate clothes like Adam Ant and teased hair like a glam metal god (fitting, since Bowie had such a strong influence on the look and sound of glam metal, especially its sleazy guitar licks).

Jareth has abducted Sarah’s baby brother. He gives her only 13 hours to enter the labyrinth and rescue him. Along the way she meets a series of zany animated creatures with squeaky voices similar to the one Bowie used in “The Laughing Gnome,” his novelty non-hit from 1967. 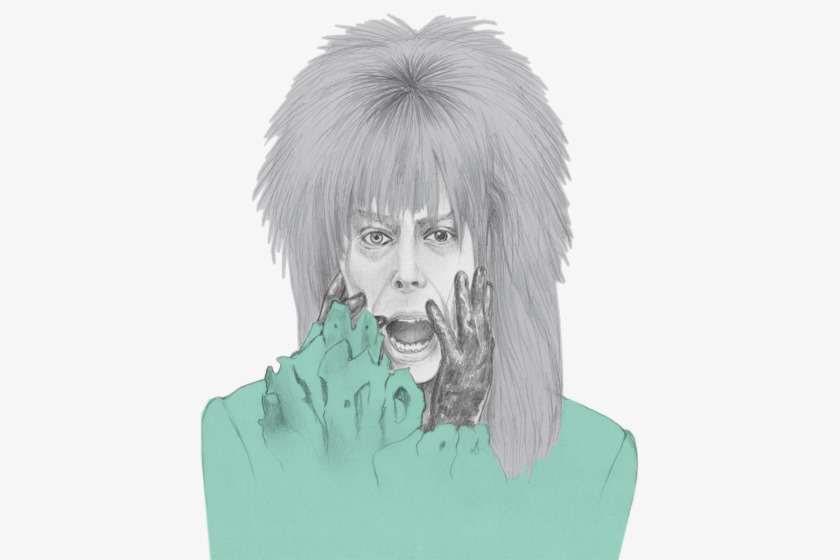 Though Labyrinth has its moments, it’s not my favorite of Bowie’s schlock operas, but it may be the best loved among average viewers. One such viewer, Rebecca B____, recounts the unconscious power and “undeniably sexual” pull of the film: “Whether you were a kid who wanted to be him or a kid who wanted to be with him, Jareth forced young girls and boys to tumble into the abyss of sexuality and gender and return with the realization that it was never quite as black and white as they might have thought.”

Rebecca may be guilty of overthinking the matter. This seemingly innocent fairytale might or might not be a crypto-sexual dreamscape, but it does hold our—and certainly Rebecca’s—imagination. Labyrinth is strange, funny, wonderful, goofy, unpredictable, fearless and eyebrow-raising-if-not-quite-creepy. It’s as deep as cotton candy and every bit as nutritious.

In Absolute Beginners Bowie portrays Vendice Partners, a name somehow less believable than Jareth the Goblin King. Set in late-50s London, the film centers on the art world—fashion, photography, modern jazz and early rock ‘n roll. In the background we see the larger and more significant story of the city: teenage rebellion; cultural change; racial tension; the struggle between art and commerce, tradition and progress.

The film cost $8.4 million but only recouped $1.8 million. A total flop. At the time, the British film industry was ailing and the production team worked hard to drum up publicity—but as the budget soared, expectations rose, egos inflated. Ideas became bigger, wilder, badder. By all accounts the project was poorly managed and soon spiraled out of control.

In hindsight, taking a gritty, working-class novel and turning it into a bedazzled jazz-handsy musical might’ve been the problem. Hiring a troupe of non-actors may have helped, too. Pop singer Sade, Ray Davies of the Kinks, jazz great Slim Gaillard, and model-prostitute-showgirl Mandy Rice-Davies are a bit wooden and clunky. Director, Julien Temple, admitted that the novel the film was based on had a “flawed narrative,” was “very hard to adapt,” and “lack[ed] drive.” So why make it?

The critics were unimpressed. The New York Times’ Caryn James found Absolute Beginners uneven and erratic. Jeremy Allen of The Guardian thought the film was “an overbudget turkey.” The improbably named Corey K. Creekmur wrote, in the possibly fictitious International Film Musical, that the picture was “interesting, if flawed.” That seemed to be the consensus.

Pauline Kael remarked on the film’s “glossy immediacy,” which sounds vaguely positive, and I agree. The costumes are soaked in dazzle and glitz. Despite being set in the late-50s, you can see the 80s winking at you from the hair, makeup and clothing.Absolute Beginners is, in this, a spiritual cousin of The Hunger and Just A Gigolo. The music, despite some period jazz, is also very 80s: Sade, The Style Council, Jerry Dammers. The production values are big, popping, obvious, a little wacky, a lotta Broadway. But we should remember that Absolute Beginners is a musical, a genre not typically blasé or understated. The overstatement, moreover, is purely intentional and entirely justified. This film clearly had a strong influence on Baz Luhrmann (Moulin Rouge!, Romeo + Juliet, The Great Gatsby), who’s often praised because of the very sins for which Absolute Beginners is condemned.

Consider the following scene: At a fashion show, Ms. Suzette hops on stage and starts boogying, in what appears to be a spontaneous yet perfectly choreographed routine, with Mozart-appareled models. Then she runs to the dressing room, throws slashes of pink paint all over herself, shreds her sizeable dress into a perfect and perfectly sexy smaller version, hops back onto the catwalk kand starts a “primitive” dance—to a mamba—with a new set of models. It should be clear, to even the most dunderheaded critics, that none of this is intended to be a literal transcription of reality. It’s fun, kooky, lighthearted, bizarre. It’s a freakin’ rock musical, not a black-and-white art-house tearjerker—we need to apply a different set of critical standards.

This brings us back to the beginning and all of Bowie’s brilliant, if flawed, pictures from ’76 to ‘86. Temple, like Jim Henson in Labyrinth, may have made a few mistakes, but he’s no hack. He was merely appropriating schlock, not wallowing in it. And that right there is the cornerstone of schlockternative cinema. You borrow a page or two from a B movie—maybe even from a D—and why not? A seamless film is seamlessly boring, whereas an awkward masterpiece is something to talk about, something to laugh at, something to enjoy and embrace. Like the gap in Lauren Hutton’s teeth, Padma Lakshmi’s scar, Owen Wilson’s crooked nose, or Bowie’s mismatched eyes.

In the wonderfully titled “Shit Parade” Richard Luck takes, as you might expect, a rather negative view of Absolute Beginners. All films have their haters, especially the schlockternative, and that’s okay. Luck calls the film a “colossal cock-up.” (Of course, he also calls it “ballsed up,” so his anatomy expertise, if not his critical acumen, is debatable.) Luck fails to recognize what schlock is all about. Many of Bowie’s films suffered from the same misapprehension. Absolute Beginners isn’t quite The Man Who Fell To Earth or Citizen Kane, but it does have incredible flare, wit and audacity, despite some wonky production values and a few bad decisions. Much of it’s implausible and, yes, it’s hard to address the issue of race, with any depth, when you’ve also got dance routines to rehearse.

What we need to remember, when approaching any work of art, is that it’s an expression, not a direct representation. In real life there are no Darth Vaders, no muggles, no Danish princes who speak in iambic pentameter. Writers are liars and audiences are, by their very nature, gullible. We respond to narrative because we suspend disbelief and, for a moment, treat the fictitious as if it were real. We gaze with dead eyes at atrocities on the evening news, but weep when Brad Pitt pretends to die.

Remember this when you’re savaging a vampire or spaceman movie for being unrealistic. Breaking into song and dance, anachronistic hair, bad lighting—these are conventions to embrace. They may not seem “real,” but neither are narrators, chapter breaks, theme songs, or the stupid sitcom schlub married to the inevitable hottie. What’s different about schlockternative films is that they don’t try to hide the fact that it’s all make-believe. They strike an uneasy balance between art and entertainment, substance and style, avant-garde and retro-trash, charming and horrible. Schlock is about acknowledging and rejoicing in how artificial and hokey art is, even the best of it.