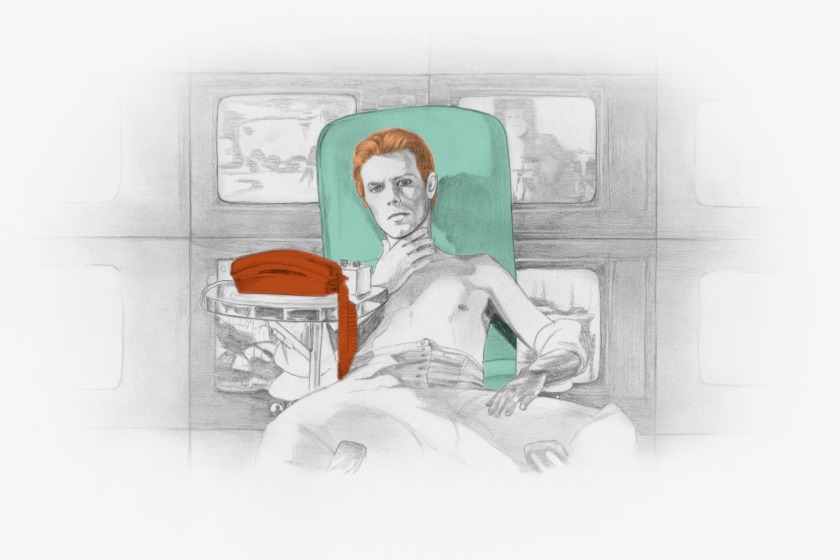 In honor of what would have been his 70th year, Five O’Clock surveys the cinematic significance of David Bowie and the schlockternative movement. Herewith: Part Two of Four…

By 1976, Bowie had already powered down and rebooted several times, like the humanoid he often seemed to be.

He had: been turned on to jazz by his soon-to-be institutionalized half-brother; gone to art school; worked in advertising; apprenticed to an electrician; performed with a half-dozen bands; changed his surname from Jones to Bowie—because of a Monkey; released an earnest, cross-legged folk album; enjoyed modest success with a single that was released several times, in multiple languages and played by the BBC during their coverage of the Moon Landing; played blues, garage, R&B and bizarre novelty tunes; pioneered glam and punk; threatened to quit music again; delved into hard rock and torch songs, at the same time; released a dystopic concept album; launched the mullet.

He’d also: got hooked on hard drugs and started the trend “having a Berlin Period”; played guitar, piano, cello, violin, Stylophone, sax, mandolin and koto—a Japanese zither; explored funk, ambient, electronic, experimental, disco, trad jazz, krautrock; invented “Plastic Soul”; drifted through identities such as Ziggy Stardust, Aladdin Sane and the Thin White Duke; appeared on album covers in a dress and as an anatomically correct half-man/half-dog; came out when you didn’t come out; and produced not only his own albums but several confirmed masterpieces by other artists—Lou Reed’s Transformer, Mott the Hoople’s All the Young Dudes, Iggy & the Stooges’ Raw Power.

All of which brings us to Bowie’s first great schlockternative film, The Man Who Fell to Earth. Before we consider the picture itself, consider the Look, which he cultivated before shooting. Long black coat. Drab pants and shirt. Black shoes. Pale skin. Hair short in back, long in front, an inverse mullet. Bowie devised the style of post-punk—Northern England Depressive—while punk was still in diapers. What’s more, his work at this time laid the musical blueprint for post-punk—jagged, cold, angular, spooky, industrial, repetitive, synth-illating. Pop music was finally liberated from blues, R&B, folk, rockabilly, country, tin pan alley, all its tired influences.

Based on a 1963 American pulp novel by Walter Tevis, The Man is a British sci-fi vehicle directed by Nic Roeg. “Sci-fi” is misleading, however. The film is dark, slow, peculiar, melodramatic, brooding and set almost entirely on Earth. It’s somehow intense and clinically detached at the same time.

Plot: An alien crash-lands his spaceship on Earth. He’s been searching for water because his own planet is drying out. The alien, who adopts the name Thomas Newton, wanders the southwest acclimating himself and generally acting quite…alienated. He eventually becomes quite wealthy through various technological inventions for his company, “World Enterprises.” He meets Mary-Lou, who shows him what Earth has to offer—religion, booze and sex. They fall in love-ish, have rough sex, play ping-pong. Newton becomes numb and practically inert after watching multiple TVs simultaneously and drinking vast amounts of liquor. His extraterrestrial background is eventually discovered using a “special x-ray” device, after which he’s seized and detained by the government.

What’s great about the film is how, despite or perhaps because of the conceptual hokeyness, Bowie’s performance is spectacular, ethereal and oddly moving. We sympathize with Newton, against our better judgment—solely because Bowie was the right actor for the part. He’d always been an ectoplasmic outsider, obsessed with space, who dressed and acted like an ET. Moreover, he was in a particularly odd state, even for him, during production. He claimed to be retiring from music—again—thought witches were attacking his mind and had his swimming pool exorcized. He was also snorting 10 grams of a coke per day throughout filming. It was his first starring role, he had little idea what he was doing and, in his own words: “I actually was feeling as alienated as that character.”

As for The Man’s schlockternative cred, it co-stars Candy Clark and Rip Torn, whose very names are classic schlock. Clark starred in The Blob and Citizens Band, which cashed in on the CB radio craze of the mid-late 70s. Torn featured in The Beastmaster and—full schlock points—the Blaxploitation classic Slaughter with former NFL great Jim Brown. But it’s the stilted dialogue that’s perhaps the schlockiest element.

The film is otherworldly and, in the best sense of the word, amateurish. It lacks the predictability, comfort and high gloss of the well-made studio film; the clumsiness and peculiarity also produce artistry and warmth. Today, The Man attracts a quiet following as the result of these qualities and because of its prescient social criticism. Roeg envisions a world of increasing violence, pervasive sex, ubiquitous media that anaesthetizes the public, wide-scale drug addiction and a government—colluding with big business—that invades our privacy at every turn.

The next stop on our cinematic pilgrimage takes us to 1978—another busy year. Aside from music, exorcisms and snorting coke, Bowie was mixing Devo’s first album, sharing a flat with Iggy Pop, and acting. His second leading role paired him with screen legend Marlene Dietrich. Gigolo was shot in Berlin and directed by English actor David Hemmings, who also appears in the film.

A detailed plot summary would be difficult and ultimately pointless. Gigolo is a long, rambling, convoluted film that was violently disliked by critics and movie-goers alike. It was almost immediately pulled from theaters and reedited, with 50 minutes lopped off. Scenes were added in which two women, who aren’t involved in the story, provide a Greek-chorus-like commentary in order to keep viewers from getting lost.

A brief synopsis: Bowie portrays Paul Ambrosius von Przygodski, a Prussian officer returning to Berlin after World War I. We follow his misfortunes, misadventures and downfall, which parallel those of Germany itself. What happens? Well, what doesn’t happen? Paul wears a monocle, carries a pig around Berlin, joins an underground Nationalist group, works in a Turkish bath and gets a job wearing a giant beer bottle advertisement. He also watches Kim Novak practically bring herself to orgasm during a one-person tango and works as a gigolo at a brothel run by Marlene Dietrich. In the end, he’s killed in a melee between Nazis and Communists. Both sides try to claim him as a martyr; the Nazis win out, though Paul didn’t even own a brown shirt.

Despite some anachronistic 70s hair and ball gowns that have a whiff of disco—Gigolo is a visual wonder. There are a number of beautiful night scenes where Paul walks through tunnels or down staircases, the screen bathed in light and shadow. The work of Orson Welles is an obvious touchstone—Othello, The Trial, The Third Man. And however disjointed the tone or plot, the film is, without question, compelling. It lurches between moods and forms, which is both jarring and entertaining and—imperfections aside—you want to discover just what it is and where it’s going.

However, Bowie didn’t like the film any more than the critics or public. He referred to Gigolo as “my 32 Elvis Presley movies rolled into one.” It’s not easy for oddball films to find an audience. Not everyone will get it. Gigolo is peculiar, goofy, provocative, patchy, challenging and magnificent, like a David Lynch film directed by Charlie Chaplin; an uneasy stew of physical comedy, drawing room melodrama and existential dread.