The drinking man’s guide to hosting the holidays…

Hosting a well-planned holiday party takes gumption. And setting the right tone with that first “welcome in” drink is everything. Here are three scenarios you’ll likely run into after inviting your nearest and dearest to bask in the season’s warmest greetings…

The Old Fashioned has become one of the standard-bearers for anyone looking to learn the basic principles of mixed drink construction. I’ve come to rely on it for occasions where the tone is casual, but slightly more refined. It’s also the perfect cocktail to entertain an evening in conversation with seven of your closest friends enjoying the hearty food customary to this time of year. I like to turn on An Oscar Peterson Christmas and craft this classic in precisely the same way the distillers of many of the world’s best bourbons would craft theirs.

Now would be a good time to tell you: you don’t need the best bourbon. In fact, save your best bourbon for sipping neat. Use a less expensive but higher proof bourbon for mixing into a cocktail. The high proof heat sticks around longer in the mix.

1 slice fresh orange cut to fit in the basin of a rocks glass
2 demerara sugar cubes
2 to 3 drops orange bitters
2 to 3 drops of Angostura bitters
2-parts bourbon (107 proof or higher)
Ice cubes made with distilled water
Cocktail napkins
A bar spoon with a muddler button on one end.

Add a slice of fresh orange to the basin of a rocks glass. Get some raw brown sugar cubes. I like demerara cubes. Their rich molasses flavor melds well with a high proof bourbon. Place two sugar cubes atop the orange slice. Dash the cubes with bitters slowly until they’ve soaked through the cubes. Add a dash of bourbon. Muddle the sugar into the fruit of the orange slice, avoiding the bitter, white rind. Once the fruit has been broken up and gently coated in sugar, add more bourbon. Cover with ice cubes.

Now we stir. The technique: place your spoon inside your glass, plan the glass on the tabletop, hold the spoon in one hand and turn the glass with the other. The warmth from your turning hand will melt the ice slightly, but not too much as to dilute the cocktail. Rim the glass with a thumb-sized cut of orange peel. 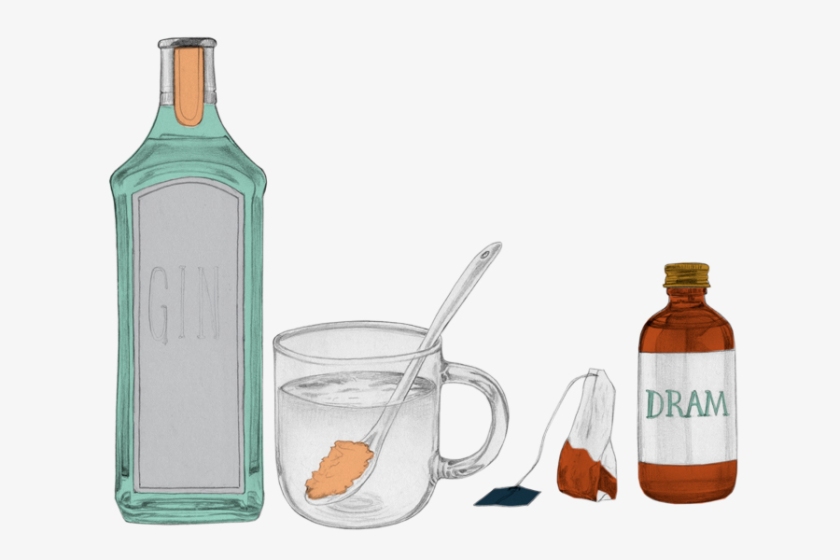 The Scenario: Elder Relatives in from Out of Town
Degree of Difficulty: Three French Hens

I made a toddy for my aunt a few years back and, from her reaction, you’d have thought I found the key to Santa’s workshop. Since then, I’ve been whipping up this gin toddy—the “Blonde Toddy”—as a nightcap for parents and older relatives visiting during the holidays. It never disappoints.

While preparing your other ingredients, brew a pot of your favorite Irish breakfast tea. Add the gin and bitters to a mug. Top with as much, or as little tea as you like. Stir in marmalade.

Sip and squeeze the orange as you enjoy the drink.

The Scenario: Ragers
Degree of Difficulty: A Partridge in a Pear Tree

I once threw a BYOB holiday party for sixty or seventy of my closest friends. It ended in utter debauchery with several of my guests jumping from the couch into the fake tree Kiefer Sutherland-style to great fanfare and cheers of “Best Christmas Ever!”

I received several texts the day after simply saying, “I blame you, wassail.” That’s right. Knowing hardly anyone brings good alcohol to a BYOB party, I made a kickin’ wassail. Now, I’m sure there is no truth to this, but a long time ago a family member insisted that our last name is somehow related to the wassail. So it was with great pleasure that I concocted this warm rum punch, “Wastler’s Wassail,” perfecting it over time to include such seasonal chestnuts as… well, chestnuts for one, but also apple cider, apple cider vinegar and dried cranberries.

Why two slow cookers? Like kindergartners at a soccer game, everyone crowds this ball. Split them up by placing the slow cookers in separate rooms. Split all the ingredients evenly. Assemble them into your cookers in the morning and turn them down around party time.

Serve with warm chestnuts as a garnish on the side.