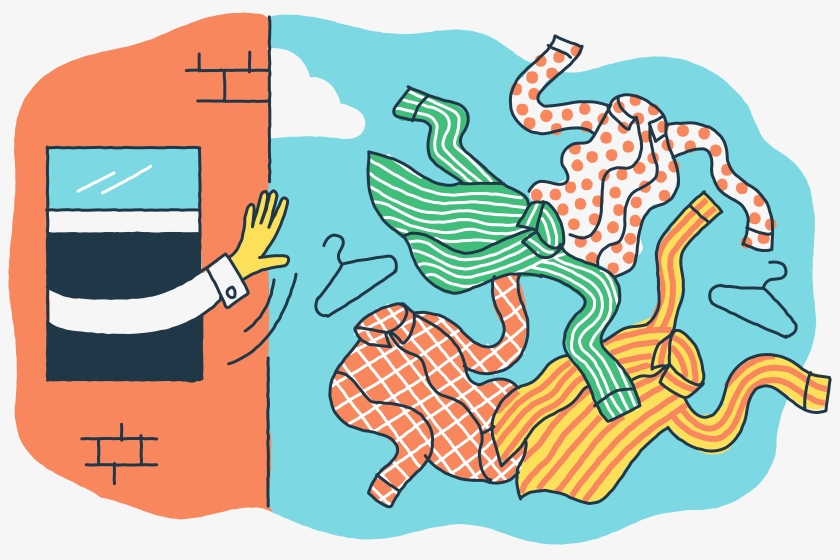 “They’re such beautiful shirts,” she sobbed, her voice muffled in the thick folds…

Poor, tearful Daisy Buchanan. I’ve been thinking of her a lot lately, and that vivid scene from the most recent Gatsby movie adaptation, where Leonardo DiCaprio is flinging his brightly-colored shirts in the air and laughing as they fall like autumn leaves on Carey Mulligan on the floor below. You see, I once owned so many dress shirts I lost count, and they were beautiful. Fine shirts, from Thomas Pink, Paul Stuart, Turnbull & Asser, and Ralph Lauren Purple Label. Unlike Jay Gatsby, I didn’t have any silk or sheer linen shirts, and none had monograms. But like Gatsby, I had shirts of many different colors—coral, lavender, peach. Shirts with many different kinds of stripes—Bengal, candy, hairline. Shirts with white collars and white cuffs, both French and barrel.

And now I’m preparing to let go of the last big batch of beauties. Give ‘em away to charity or whoever will wear them with pleasure. My wife, Donna, liked my shirts a lot, even helped me pick out more than a few of them. But don’t expect her to weep like Daisy when they’re all gone. She understands why I’ve been holding on to so many of them for so long. Five years ago, I lost more than 30 pounds, and my sublime shirts hung on me like drapes. I kept them just in case I gained back the weight. Hasn’t happened yet, and I’m determined it never will.

And then there’s this: Now retired, I no longer work for media establishments like Newsweek, ABC, and Time Inc., where back in the day it was customary to dress if not for success, then simply to look—you know, professional when reporting a story or managing a staff of writers and editors. Suits and ties and pressed shirts, sports jackets and gabardines, cap-toe lace-ups and Italian loafers. Then came Casual Friday, which slowly morphed into Casual Everyday, and now we have a generation of workers who scoff at the notion of job-appropriate attire and refuse to adhere to a dress code. Which prompts the question: If I were to return to the workplace today, would I be wearing jeans or chinos and sport shirts and sneakers? Hey, things change, and I’ve rarely had a problem changing along with them—though I’d probably stick with my Italian loafers.

Anyway, after retiring and losing all that weight, I figured it hardly made sense to deplete my 401k by replacing my collection of splendid shirts with more of the same. So I bought a few of your basic Brooks Bros. button-down-collar shirts—in slim fit! Got that? I’m now as trim as I was in college. Even so, I still look with longing at my remaining bevy of larger-size shirts each time I walk into the closets in my Manhattan apartment and my Bronxville home in Westchester.

As I begin the unhappy task of purging, please don’t assume I’ve fallen under the trendy spell of Marie Kondo, the mega-selling author of The Life-Changing Magic of Tidying Up. Her new book about decluttering—or whatever the hell you call it—is titled Spark Joy: An Illustrated Master Class on the Art of Organizing and Tidying Up. It’s also on its way to becoming a publishing juggernaut. (Geez, I wish I were making this up.)

Well, Ms. Kondo, call me a messy romantic, but I find no joy or magic in getting rid of the comely-cotton shirts that remain tucked into my closet shelves—though I will concede it’s gratifying to imagine someone else enjoying these shirts as much as I did.

Right about now, maybe you’re wondering: Does he still have the ties he wore with all those shirts?

Yes…well, most of them. They go next.

And maybe you’re also wondering: How many ties are we talking about?