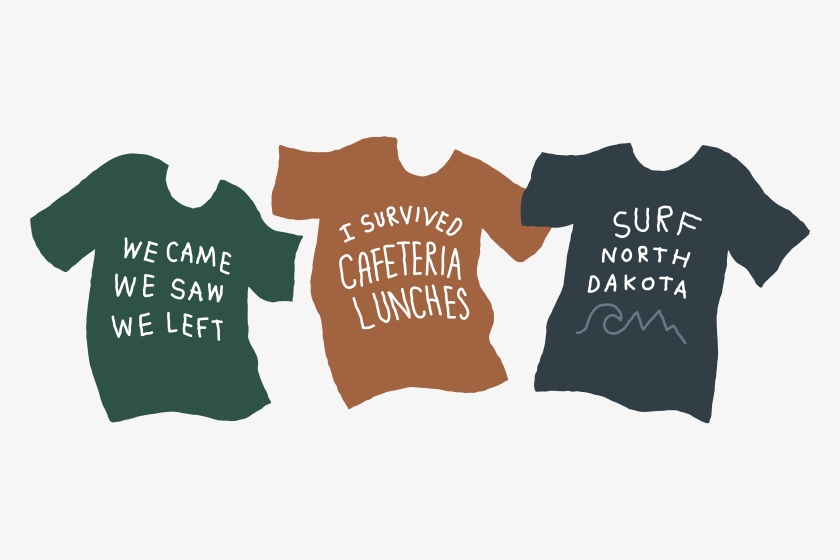 You know what’s wrong with Downton Abbey? Besides the fact that no one uses contractions and there aren’t any 7/11’s; no T-shirts. Olden-timers pranced around in full kit. Playing tennis in top hats and spats. Fist-fighting in starched collars and cutaways. They may have even sported monocles or lorgnettes during intimate moments.

The past was uncomfortable. We’d never survive. The lack of digitized entertainment, premium coffee and Comments Boards would be tough, but the wardrobe would be well-nigh impossible to endure.

I could get by with just three TV networks, the local affiliate, 100 cable channels and absolutely no Netflix. The one thing I couldn’t bear is a life without T-shirts and the lax sartorial standards which have allowed them to flourish.

Let’s take a closer look at the humble T-shirt. An impeccably simple, beautiful and austere design—with infinite possibilities. Comfy. Durable. Cheap. The classic 100% cotton version is an impeccable tool for soaking up and displaying the fruits of your gymnastic labor.

It started with the “bachelor undershirt,” marketed as a new item for single men back in 1904. It didn’t have buttons up the front—it pulled conveniently over the head—so getting dressed was now marginally quicker than before. This was clearly a great innovation for time-strapped men who wore pants, suspenders, sock-garters, shirts, jackets, ties, undershirts, vests, hats, shaved with straight razors, and used pomade and mustache wax.

The following year, the US Navy mandated that all sailors wear button-free shirts under their uniforms, popularizing the “crew-neck.”

F. Scott Fitzgerald brought “T-shirt” into the vernacular in 1920 with This Side of Paradise, and later Marlon Brando pioneered the t-shirt as a stand-alone piece. Young boys adopted the look as “play clothes,” and in the 60s California surfers and skateboarders made t-shirts the go-to choice for warm weather activewear.

But the T-shirt isn’t merely a fun, easy-going and stylish way to clothe yourself. It’s an essential component of modern culture. How do I love tee? Let me count the ways…

Without one, people wouldn’t know that you’re accompanying the dunderheaded person to your left—you don’t write I’m With Stupid on a windbreaker.

How else could you tell the world you enjoy parking lot burritos and patchouli without a multi-colored Skull-‘n-Roses t from the Dead’s ‘81 Fillmore shows? You can’t tie-dye a business suit.

The T-shirt is a tabula rasa.

Want to shout that you’re a vegan or supporter of Geraldine Ferraro? That you’re a Whig, anti-masonic, Dreyfusard, peace-lover, trainspotter, birding enthusiast or bikini inspector? Write it on a T. Want to advertise your family reunion, charity event or humorously-named restaurant? T-shirt.

What if you need to reiterate that, 30 years ago, a British synthpop act promoted relaxation? Are you going to write it on your culottes? Festoon a snazzy waistcoat with this message? Emblazon the idea on a nice pair of tube socks? I don’t think so.

Forget the polio vaccine, space travel, the internet and Greek yogurt—the t-shirt is the greatest triumph of the 20th century. I need my casual comfort. I don’t wear neckties or mock-turtles. I couldn’t handle a starched collar. I can’t button the top button. I need a free and unrestricted neckline. Before the T-shirt, this was all but unattainable. The v-neck is my Bill of Rights.