“Are you looking for Pete?” A young boy with long brown hair and a backpack asks when we roll down the car window. We’re on a dirt road punctuated with patches of moss and ferns. We tell him we are. “Last house – way down there.” He turns and points. The boy’s dad, Pete Athans greets us with a wave from the doorway. “How’s life?” He asks as we kick off our shoes. 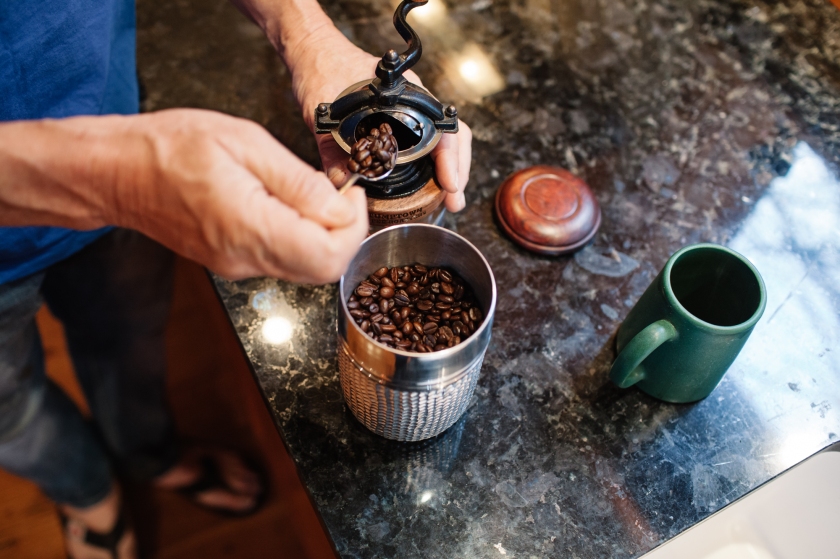 Pete is one of the foremost living mountaineers and climbers in the world. He’s summited Everest seven times, earning him the nickname “Mr. Everest” (also his email address). Having spent so much time in Nepal, Athans had no desire to climb and leave – he’s adopted the country as a second home; spending months there at a time teaching climbing skills, working to make Everest ascents safer for adventurers, and acting as an expedition leader to archaeologists on big digs. On the morning we meet him, Pete has just returned from Nepal, having spent most of January there.

Athans prefers keeping close to nature. Not shocking for someone who’s spent a third of his life waking up outdoors or in a tent. He and wife Liesl’s cabin-like home on Bainbridge Island (a short ferry ride from Seattle) is tucked away amongst towering cedar and fir trees with a view of Port Orchard Bay. The couple has chickens, bees, a dog (Sailor), cat (Willa), and two children – Finn (who pointed us towards the house earlier) and Cleo (whom Pete wakes up with every morning at 6:30am). Living on the island, the Athans family is constantly affected by weather’s whims; and occasionally they lose power – sometimes for days at a time. They heat the house with fire, cook with gas, crisp bread over an ancient camp toaster, and “love to bust out the hurricane lamps,” says Pete. “We’re pioneering the simple life around here.”

Amongst climbers, Liesl tells us, Pete is famous for his coffee. He carries his beans in the base of an old, stainless steel oxygen tank he found on Everest. A craftsman in Maine cobbled the artifact into a working container. He makes himself a thick, black blend in a French Press and pours himself a mugful. Then he goes out to the chicken coop and returns with the day’s haul – 3 eggs (they’ll get as many as 15 a day in the summer) – he boils and scoops the eggs into bowls and tops them with salt and pepper. Liesl, a filmmaker, takes a break from her desktop to join him for breakfast.

Pete starts a fire in the fireplace with fresh logs. “The Dani tribesmen of Papua New Guinea can start a fire in a driving rainstorm with wet, green logs and not a match in sight,” he cracks. Casual references about far-flung locales spill from Pete like rainwater from a Seattle gutter. He’s gracious and gentle, a Buddhist by choice, and, he says, in a hope to further connect to the Nepalese locals he spends so much time with. He’ll often light incense in the morning, and offer water in a bronze kettle at a small shrine – a Generosity Ritual. Give the order to “Namaste,” and Sailor, the dog, will jump to his hind legs and open his paws.

“I came for the mountains, but what kept me [there] was the way of life – the people.”

Pete tosses on a fleece and he and Liesl leave for their morning hike – up the driveway and onto a trail formed by an old landslide, covered in impossibly green overgrowth. On a good day, you can see mountains in the distance, where Pete spends much of his summers – leading expeditions and teaching would-be climbers. He’d said about Nepal: “I came for the mountains, but what kept me [there] was the way of life – the people.” The same could be said for the world he’s created here.