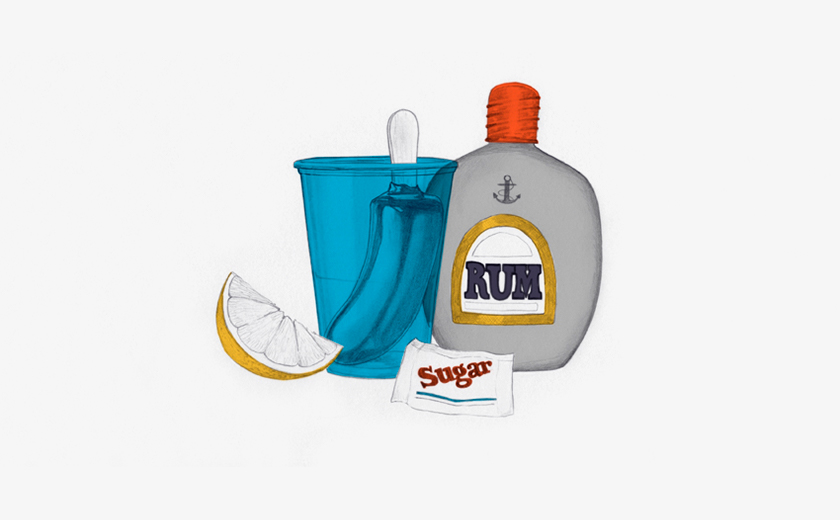 Armed with only a flask and a little ingenuity, Max Wastler elevates common cocktails with supplies from his seasonal surroundings.

The truest pool rats know that the best pool snack bar offering is the frozen chocolate banana. First seen on the beaches of Newport Beach, California, in the middle of the last century, the frozen banana craze has since swept the nation, and we’re all luckier for it. You’re luckier still if the following accompany you on your next pool or beach day: 1 flask of dark rum, 2 lime slices, and 4 sugar packets. Pouring at room or sun-soaked temperature into an empty cup, split the flask of rum between two cups, squeeze a hefty lime crescent into each cup, and add a sugar packet or two to each cup (to taste). Then stir with the frozen banana, allowing some of the chocolate to melt. If it’s a hot enough day, the frozen banana may not cool the drink enough, and if that’s the case, top with ice. I also recommend, if you like fizz, a shot or two of cola.

For some reason, growing up, Lee Trevino was always my favorite pro golfer. And while Arnold Palmer and John Daly have received the highest honor any ace golfer could hope for – no, not the green jacket, but a drink named after them – this has eluded Mr. Trevino. In an effort to remedy that, the next time the snack cart catches up with you, come prepared with a canteen of anejo tequila. Buy a light lager from the cart, ask for a cup of ice, a few salt packets, and at least a half-a-lime. Fill cup half-full with the anejo, squeeze the lime, and top with the beer. Add salt to your rim or pour it directly into the cup. Because the anejo is barrel-aged, its sweetness will soften some of the bitter beer taste. For added spice, grab some chips and salsa, and throw a teaspoon-size portion of salsa in the bottom of your cup. As Lee would tell you, the thicker salsa is better.

Camping is an American’s way of getting back to our roots. Much like Lewis and Clark, Kit Carson, and Daniel Boone before us, each summer millions take to the woods in search of a sense renewal not-so-easily found in the confines of the partitioned cubicle walls of a life lived 9-to-5. What most people don’t know, though, is that the missing ingredient to any great camping experience is…ice cream. And not just any ice cream, but coffee-flavored ice cream. The next time you pull into the KOA Convenience Store, seek out a two-liter bottle of cream soda, golden in its color, and two pints of the highest quality coffee-flavored ice cream you can find (the fewer ingredients the better). Pack a cooler with ice and shove the pints in the middle. By night’s end, the ice cream will likely have melted to a nice, shake-y consistency. Pour some high proof bourbon into a glass ¼ of the way full, the coffee ice cream to half, and top with the cream soda. Then stir it up, little darling. You heard it here first: the cream soda coffee float with a shot of high-grade bourbon is the new national pastime. With one healthy gulp of this shake, you’re sure to be pronounced D.O.A.