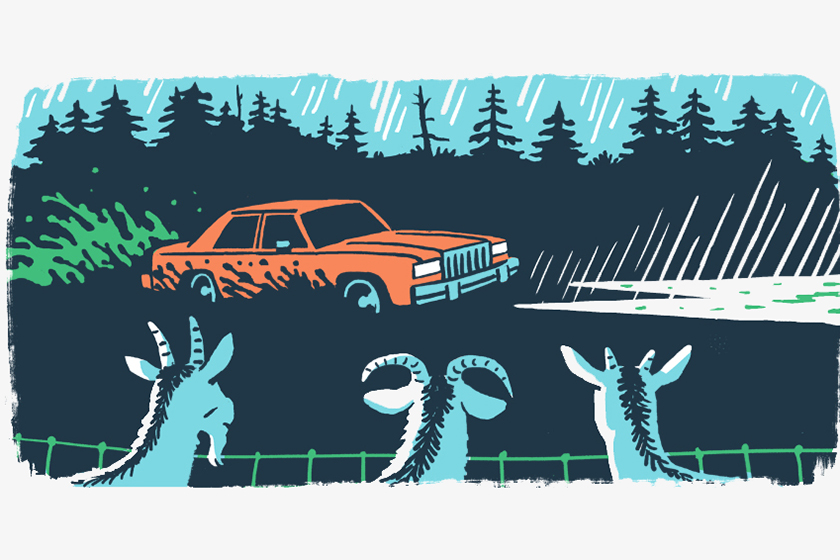 The universe doesn’t let such a selfless, loyal act like that go unnoticed.

A lot of people hate the Police. And sometimes it’s for good reason. But me? I hate the police because they’re always around whenever I’m breaking the law. My first encounter with the men in blue happened years ago, just after I had been handed my first set of car keys. While most kids my age were too chickenshit to go a mile over thirty (let alone take their hands off ten-and-two), my friends and I had an unlawful agenda in mind from the get-go. And that agenda included (from the top): rolling down our windows, blowing out our speakers to Pantera, pushing the needle into the red, and, ideally, taking our car off-road into some poor farmer’s field, leaving a trail of mayhem in our wake. For those unfamiliar, we call that “mudding” where I come from.

The thing is, mudding isn’t legal. Especially when you’re mudding through someone else’s property. And even more so when you’ve got half a tallboy of Bud Heavy in one hand, and a newly minted Driver’s Permit in the other. (That’s right. Permit.) So, by now, I bet you can imagine the circumstances we found ourselves in one rainy, Saturday night. There we were, mudding around in some goat farmer’s lawn, practicing our signature mark (5 ill-formed doughnuts in the shape of the Olympic rings), when around our third or forth doughnut (and fifth or sixth beer) the rain started pouring down, and the mud started getting thick. Too thick, in fact, for our ’79 Crown Victoria which weighed, I’d guess, as much as a dump truck. As much as we spun our tires, there was nothing we could do. We were drunk and stuck; too scrawny to push our sinking car out of the mud, and too irresponsible to problem solve the situation ourselves. So we did what any irresponsible kids would do: call our one responsible friend to come problem solve the situation for us. And no sooner than he arrived, so did half the local law enforcement. We were busted.

Or so we thought. The thing is, our friend who came to our aid knew we were in deep shit. And beyond being a responsible, problem-solving young man, he was also just one hell of a guy. Loyal, too. Just as we were consoling each other with comments like, “It’s cool, man. It’s probably not a felony. You’ll probably still get into college. I’m sure of it!”, our friend was spinning a farfetched tale about how he was the one who got stuck in the mud after swerving off the road, and we were the ones he called to help push him out. “Boys will be boys,” he told the cops, totally unbeknownst to us. “I just needed their help pushing me out. That’s all.” The cops immediately called his bluff and asked him if he was really ready to take a fall for us and, without hesitation, he looked them all square in the eyes and said, “Absolutely. Any day.”

And just like that, we didn’t go to jail. And we didn’t even get in trouble. And neither did our friend. Because, despite how unlawful our crime was, and despite how unsavory I might find the police, the universe can’t let such a selfless, loyal act like that go unnoticed.