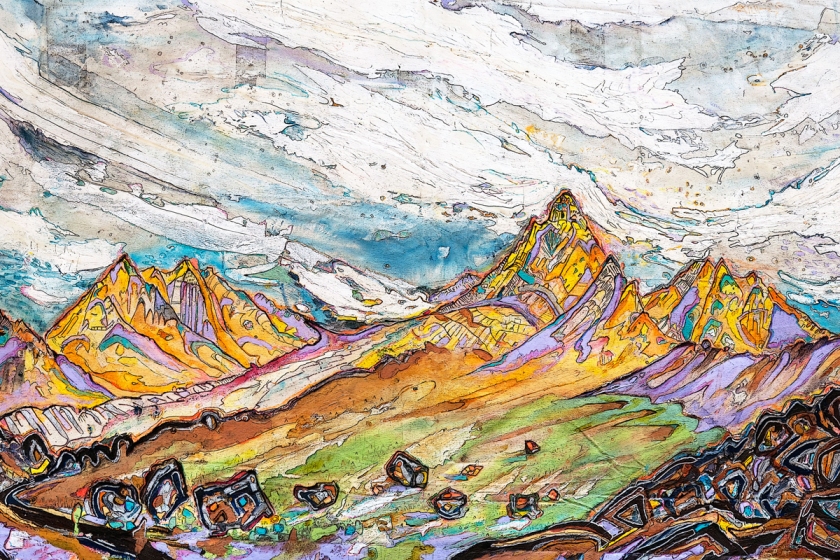 My first attempt to summit Meru, a 20,700ft vertical wall of rock in the Himalayas. (Part 2)

Check Out Part I of Renan Ozturk’s Close Shave Here.

Day after day after day we kept going up, and we’d be hypothermic when we got to the portaledge to rest. We’d do our best to warm up but your hands and feet would never fully recover from the previous day. After we were 30 percent up, we were basically pioneering new terrain that hadn’t been climbed. That wears on you mentally. You can’t make a mistake, because if you make a mistake you break your leg, and if you break your leg there’s no one to come rescue you.

We’d get to sections where you’d look up at these overhanging blank walls and there’s just nothing there. This just isn’t happening, I’d tell myself, now they’re gonna turn around. But Conrad and Jimmy just kept going. They were my elders and I put complete trust in them to make the right decisions – especially Conrad. Again and again, I thought we were going to turn back down and they just kept going up.

Then the climbing got so steep it was overhanging. One rope length would take all day.  We were on the verge of hypothermia to begin with – not having the calories we needed to survive up there. On top of that, the person holding the rope was hanging in space and not moving. There was little blood flow from movement, and the harness constricts blood flow even further, so you would just feel yourself go hypothermic over the course of these 7-10 hour leads, when the first climber is going up to carefully put up the rope.

I was filming as much as I could throughout all of it. Two thousand and eight was one of the first years where you could have a pocket HD handy cam camcorder. I also had a point and shoot camera that took really shitty video quality. Jimmy has shot for National Geographic and is recognized as one of the best extreme photographers in the world. But Conrad wasn’t really into the cameras. And you couldn’t shoot too much because the task at hand was so difficult.

The challenges became more and more traumatic. The conditions always seemed to be in the wrong place at the wrong time. We got up to a point that was like the apex of a roof on a house with a lot of snow on it. The wind had blown the snow into a giant overhanging lip that could collapse at any second. In this particular case, the giant snow lip was jutting out about 300 feet into the air. To gain the ridge, Conrad had to tunnel into it and through it. The only safe spot for us to hold his rope while he was doing that for an hour and a half was right beneath him in the line of fire.

Ice and snow and shrapnel were hitting me directly in the face and all over my body – adding to the trauma and the hypothermia. I was screaming at the top of my lungs in pain but no one could hear me because you’re in this loud whitewash of debris that’s coming down as he’s tunneling up. That was definitely a memorable breaking point for me. I had put up and kept up to that point. But that depleted everything and anything I had left.

I could feel my feet getting frostbite. It was pretty unsafe. But part of the game in that kind of climbing is you’ve got to be able to really push past your comfort zone.

We decided to jettison the portaledge and just go light with no sleeping gear and make this one big last push for the summit.

We starved and suffered through the push. After 17 days, we were two rope lengths from the top. It was so close we could see the peak a little more than a football field away.

We didn’t have the portaledge to sleep that night. Conrad and Jimmy were debating whether to sleep out in the open on this knife-edge ridge with no shelter. I thought they had lost their minds. This was a new level for me. I knew we were at a point where if we kept going we would lose fingers and toes to frostbite and maybe our lives. But I wasn’t going to be the one to say it. It was pretty much up to Conrad to make the decision.

Even though you know what you’re doing is the right decision, it’s hard to describe the heartbreak at having to turn back down at that point. But we were brushing up against death, and luckily going down was the decision Conrad made. It was about the closest shave you’d ever want to have.

In some sports when you tap out the fight is immediately over. But it’s not like that in climbing. It was going to take three days to get down.

We rappelled the face. We cut those giant bags of equipment loose and you’d watch them careen down the face and land down the glacier and you could only hope that you’d find them again because after a while they’d disappear out of sight.

That enables you go to a little quicker, but they were really long days going down. We got back to the glacier where our advanced base camp was in the middle of the night, but we couldn’t find our tent. We just wandered aimlessly around the glacier for hours. Eventually, we just gave up and ended up sleeping out in the open directly on the snow. One more horrible night on top of it all when we were so depleted and had gone 19 days on 7 days of food and fuel.

The next day, when Conrad poked one of the poles from the portaledge around in the glacier, he found the tent. It had been completely buried in the giant storm we had weathered on the wall. It was one of the strongest full-sized expedition tents The North Face makes and it was meters under the snow.

We had to dig it out and cut it open piece by piece with knives to try to get the few little bars of food that were in there. From that advanced base camp, it’s another 3,000 meters down and then four or five miles from people waiting for you with actual food.

We had lost communication, and we were twelve days overdue, so people were worried about us. But after a while they could see us coming down through binoculars.

It was a spectacular failure. But a shower was still a long way away. From base camp, it’s another three-day walk to a village. From there it’s a two-day bus ride to a town – and that’s where you get a shower.

By the end, Jimmy was in a wheel chair and I couldn’t walk for weeks.

It takes at least three years to forget how painful an experience like that is. That first climb still stands alone as one of the hardest things any of us has ever done. But it was such a significant moment for the climbing world, and the hardship that we’d all gone through together made us want to go back with the same team and finish what we had started. We decided to try again in 2011.

Deciding to go back was a big decision in the first place. But some really serious events happened between the two climbs.

Five months before we were going to leave for the second attempt at Meru I got into a ski accident in Jackson, Wyoming, in which I crushed my skull open, broke two vertebrae in my neck and lost half the blood supply to my brain. I came really close to dying.

Two days after that, Jimmy got into an avalanche in Jackson that he shouldn’t have survived. It rattled him and his mental game for doing these dangerous things, rattled him to his core.

We planned to leave for India only five months after my ski accident, and there were people who were upset. There was pressure from our families and the climbing community. Why would you go back to this thing that almost killed you? Especially with me in shambles from this traumatic accident and with Jimmy still reeling after he’d almost died in the avalanche. They had a point. I was only partially recovered, weak as hell, and under threat of having a stroke at that altitude.

As we headed off for New Delhi, there was so much pressure to do it and be safe and not kill me because of the condition that I was in.

On the final day before getting up to the base camp and starting the climb we passed the actual head waters of the Ganges in Garhwal, Himalaya. It’s called GauMukh, the cow mouth.

The river is just gushing out of the glacier below the peak that is the center of the universe. For many people, you can’t achieve nirvana unless you bathe in this river.

There was so much stress, that it was kind of a big moment to prepare for the second attempt by getting naked and jumping in the headwaters of this sacred river that goes on to touch millions of lives in so many different ways.

So we stripped down and jumped into the freezing cold glacial outwash, clearing the mind and spirit. Then we headed for the base camp.

The three of us were beyond words. It was a relief to actually be at the mountain where we could start climbing. That’s what we live for, to be on the mountain and climb.