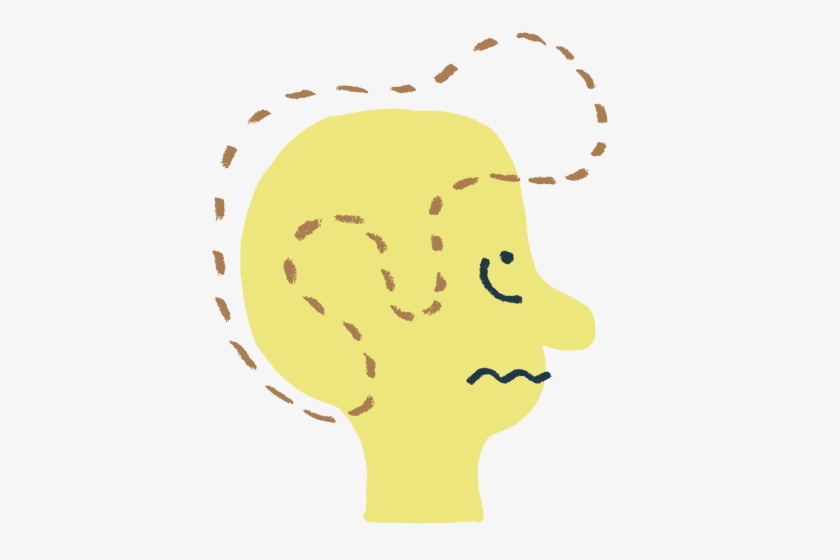 It started, as many personal crises do, in front of a mirror. I was a sophomore in college, and stark light from the naked incandescent bulb was bouncing off a part of my scalp I’d never seen before. I peered at it curiously in the glass. Before that very moment, my forehead was a finite plane: from my heavy Marx Bros. eyebrows, it had always ascended a moderate few inches up to a sheaf of tousled, wavy chestnut-brown hair. My grandparents always doted on the thickness of my hair. Healthy hair. Handsome hair. Good Italian hair. That was always that — or it used to be.

In front of the bathroom mirror, at the ripe age of 19, my forehead had very clearly begun a northward march, which would have been less concerning but for the fact that foreheads don’t march anywhere. No, this was a retreat from above. For the first time, I felt the peculiar, knotty dread of genetic inevitability in my stomach. I switched off the light and left the room. It would be the last time I’d look in a mirror for a month, and it would take another nine for me to accept the truth I saw in the looking glass that day: I was balding young.

There is no more immediately visual indicator of human deterioration, I think, than a bald head. Wrinkles are only clear up close. Sagging breasts & backsides may be lifted with bras and compressed with Spanx and swaddled up beneath all manner of yoga pant. Erectile dysfunction has been so widely commercialized that these days it seems less like a failure of youth than a feature of age — one that medical science is all too glad to remind you that it has solved. But even from a great distance, the message a bare scalp sends is unmistakable & undeniable. Here hath begun youth’s exodus.

Over the course of the next two years, I tumbled into a tight, manic spiral of hirsute obsession. I spent free time poring over Wikipedia pages on follicular stimulation. An avid collector of baseball caps, I ceased wearing them, for I’d heard that over the course of time, hats might damage hair’s roots. I made weekly trips to the pharmacy for Rogaine, and applied it to my head with the reverence of sacrement. I spent hundreds of dollars on Propecia — at this moment in time, the only FDA-approved prescription drug designed to treat male pattern baldness — because as a cosmetic ailment, it wasn’t covered by my medical insurance. Pomades, gels, conditioners, oils; you name it, I bought it, then slathered it onto my noggin.

Did it help? I don’t know. I don’t think so. But besides their upfront costs, these remedies didn’t hurt, either. The mirrors were a whole other story.

After my initial aversion, I became utterly fixated on my reflection. It was crippling insecurity masquerading as vanity: every mirror was an opportunity to ensure my hair was parted (combed, brushed, raked, swept, etc.) just so to mask the thinning wedges between my temples and the crown of my head. I was Bizarro Narcissus, so disgusted by my appearance that I couldn’t stop staring at it. Every haircut, my pulse would ratchet uncontrollably as I bore holes in the barbershop mirror, straining to see if my hair loss had reached levels so obvious as to become unbecoming. I missed classes. I showed up late to parties. I could not leave a mirror ‘til I was satisfied my good Italian hair was as thick & lustrous as it always had been, and always would be. I was a wretch.

Despite it all, a million hairs fell from my head each day, as silently as snowflakes.

Half a decade later, I’m still not what most people would call “bald,” but my hair is leagues beyond the waypoint of virulent youth. I wear it martially short in the summer, and slightly fuzzier in cold weather. It’s honey-brown now, because it’s got less density, and it’s undeniably thin. That’s for sure. If 19 year-old Dave saw what was in his future, he would’ve wept in horror. But 26 year-old Dave doesn’t spend a single red cent on hair-loss products, nor does he waste undue time gazing wistfully at his wispy dome in the mirror. I’ve recovered from the torturous flat spin of hair despair, at least for the moment. I stopped caring.

It ended around my 25th birthday. That knot of dread in my stomach untied itself, quietly skulking off into the far reaches of my psyche. Like a five-year fever, my obsession with my own decay had broken.

Would I prefer to have a tangled mane of curly locks cascading over my brow? Duh. I’m human, and most of us are at least a little vain. Borne away on a current of thousand-year-old hormones & biochemicals, my follicles have betrayed me. But they say the best revenge is living well, so I grew a mustache & shaved my head. Each time I see myself in the mirror, I grin bravely, and think: My hair is gone, but I’m still here. Then I turn off the light and leave the room. Our reflections can only grip us as long as we stand in front of them.