Waffle Whiz. Chaos Conductor. X-Acto Expert. We don our rain slicks with Reed Anderson and his clan at home in Brooklyn.

“We usually start the week with some fresh made waffles, and then we freeze them, so the kids can forage”

“As you can see, this isn’t rehearsed,” Reed Anderson makes a sweeping gesture towards his countertop, where flour, milk, eggs, coffee and a package of bacon are in various stages of dissection. “And there’s no cookbook!” He pirouettes. “I know… you guys must be thinking ‘at least it’s not just [him] sitting around in his kimono – ‘Who does this guy think he is, Julian Schnabel?”

Anderson is a Brooklyn-based artist. His recent works evolve around intricately cut paper, which Reed uses first as a stencil and then as additional fodder to create poppy, colorful and at-times explosive projects that continue to grow and expand on themselves. His most recent exhibition, House of Yes, is being shown through Dec. 31st at Gallery 16 in San Francisco.  Reed calls his work, “a new species of abstraction.” His morning is also a rather conceptual form of domestication.

“We usually start the week with some fresh made waffles, and then we freeze them, so the kids can forage,” Reed explains. The Grand Street loft where he and his family live is warm and lovingly disheveled. His wife, Gretchen, emerges from the bedroom in a yellow slicker. It’s raining, and she has to move the family’s car. “Be brave,” Reed jokes as she walks down the stairs. Minutes later, he has the batter ready for the waffle iron. He tunes a nearby radio to NPR and yells: “Children!” 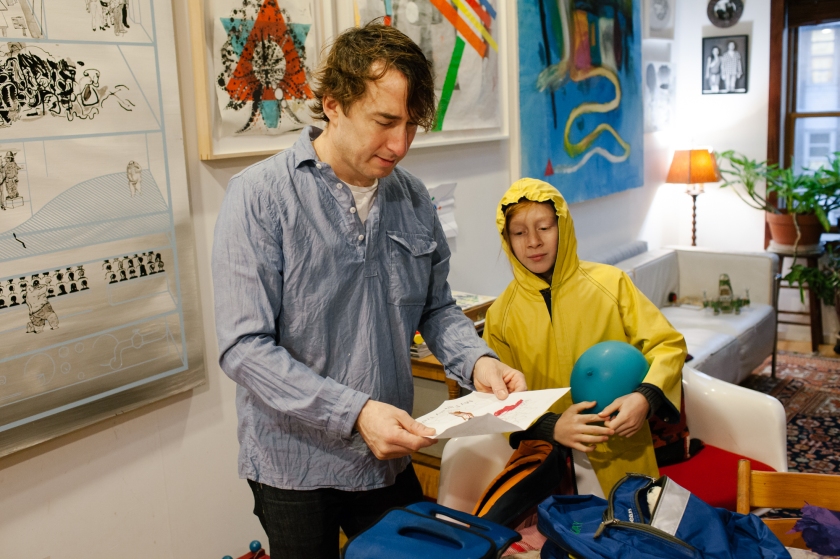 Out of a small bedroom tear Horace, 9, and Holiday, 6. Horace has long red hair and a sheepish smile. He dives almost immediately into a comic book. Holiday is adorable, shy and fiddles with a robot toy. Both wear pajamas and sit at the dining table, washing down waffles and bacon with Odwalla juices. Whenever their attention wavers from the task at hand, Reed’s voice floats from the kitchen: “Eat!” When breakfast is complete, Reed rolls into making lunch – salami on challah (“the man even bakes his own bread,” says Gretchen) before sending the boys off to get dressed and brush their teeth.

Reed showers, tucks a t-shirt into a pair of jeans and combs his hair in the bathroom mirror. “I use Neem oil in the winter, which prevents dry scalp,” he tells us. “And I buy EO Vetiver Deodorant Spray online in 6-packs.” Holiday dances past his dad in a blue rain jacket while Gretchen jokes: “It’s too bad it’s raining, because Reed usually rides his fold-up bicycle [to his studio] wearing his neon vest – it’s really quite the look.” She shakes her head. “He’ll ride into groups of people and bark like a dog to get them to disperse.”

“As you can see, this isn’t rehearsed.”

The kids are due at school at 8:30, but they’re still reading at 8:20. Luckily, school is right across the street. Reed grabs things off his artfully cluttered dresser and stuffs them into a tote bag. He zips up his slicker, says goodbye to the clan and takes the L train towards Bushwick. With the practiced hysteria of the morning behind him, he changes into a paint-splattered sweatshirt, pants, and lights some incense. His studio, like his home, is littered with colorful works and books and materials, inspiration for work that also shares that certain, lovable disarray. “I think I really need an assistant,” he says as we turn to go. “Do you know anyone who’s good with an X-Acto knife?”