Trusted Tastemaker. Feline Fanatic. Committed Commuter. Wake up with Ben Watson and his bitches in his bright box of an apartment in Cobble Hill.

Ben Watson’s bright box of an apartment (his words) is serene at 7:00am. The sun has just popped over the surrounding buildings, splashing pale orange light throughout the living room. One of Watson’s cats, Frank, drinks from the tap and the flow of water on the sink punctuates the spa-like quality of the space. Another cat, Meyer, paws at the door and Ben lets it outside. “I see you’ve met gray bitch and white bitch,” he says. We laugh. “Their legal names may be Frank and Meyer, but no one ever calls them that…”

Watson’s career as a bastion of taste is full of bold-faced names – High-end Swiss furniture maker Vitra, Nike, and now Herman Miller, where he serves as its creative director – coming up with smart ways to tell the story and tout the innovative products of a 100+ year old design company. Ben commutes back and forth steadily to Herman Miller’s Michigan headquarters, and also keeps a cabin there. But his New York morning begins each day in Cobble Hill. With the bitches.

“The first thing I do is make espresso,” says Ben. “And it won’t just be one.” He fires up his 15-year-old, piston-operated La Pavoni. “More like several… but I’ll never drink a coffee after 4:00pm.” Watson explains his philosophy on sleep: “I never set an alarm. I know I’ll sleep between 7 and 7.5 hours, so I’ll just go to bed when I have to in order to get the sleep I need. If I have an early flight, I’ll adjust.” This system, honed after years of traveling the globe for his gig with Nike, has worked for over a decade. 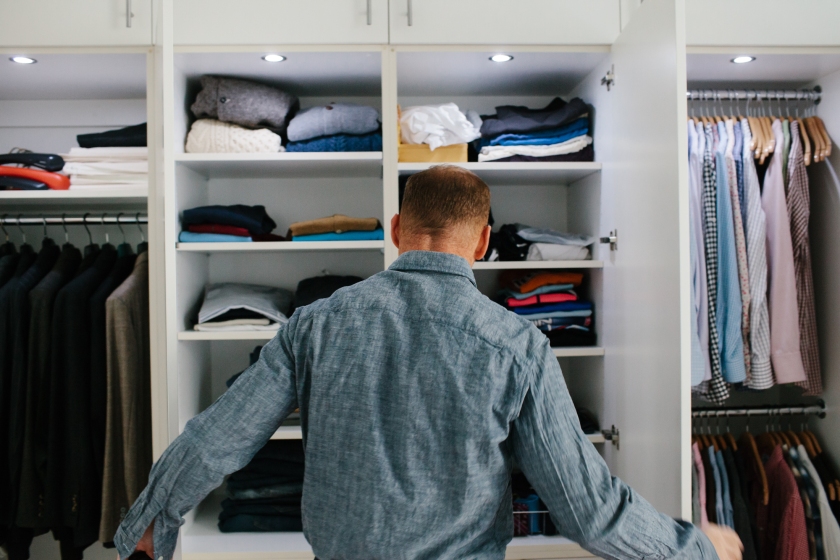 Watson makes his large bed in a simply decorated room. Frank and Meyer sleep in a converted office, where Ben goes next for 20 minutes of daily yoga. Before starting a string of poses, he turns on some ambient music. “I know a lot of people do NPR in the morning, and conceptually, I’m glad NPR exists,” he smiles. “But I don’t want that in my ear in the mornings… and I love Spotify instead of, say, the radio, because I think it encourages further discovery.”

After yoga, he showers, shaves his neck, and applies Neutrogena Men’s Age Fighter (“this stuff works!”). He then walks back to the office, where an impressive closet is hidden behind uniform, white paneling. “A friend of mine told me about his rule – 100 hangers, and I adopted it. That’s a lot, sure, but it’s all you get for everything – pants, coats, shirts, sweaters. And when something new comes in, something old needs to depart.” Ben tosses on a chambray shirt and returns to the kitchen to cook breakfast. He eats the same thing every morning: sunny-side up eggs with smoked mozzarella, heirloom tomatoes and arugula, and yogurt with jam, chia, flax and wheat germ. He sets a single placemat out for himself at the counter and chases the food with water and more coffee.

“100 hangers. That’s a lot, sure, but it’s all you get for everything – pants, coats, shirts, sweaters. And when something new comes in, something old needs to depart.”

Ben brushes his teeth, throws on a sportcoat and scarf, and completes the final morning chore – emptying the litterbox. (“Maybe we’ll skip photographing that? I’d guess people might be able to imagine it.”) He then climbs down several flights of stairs to the street, where a light blue cruiser bike awaits. His route – “Smith Street to the Manhattan Bridge, and then Chrystie Street to Broome to West Broadway and finally to the Herman Miller studio on Spring and Wooster Streets in Soho” – happens every day, rain or shine. “Plenty of time,” he says as he hops on and pedals away, “to think about all the work I should have done yesterday.”