“Gentlemen, I’m so sorry, but I’ve only made coffee for myself.”

“Gentlemen, I’m so sorry, but I’ve only made coffee for myself.” Kevin West announces with a mischievous grin. He’s standing in his kitchen wearing striped lounge pants and a cardigan, his hair amiss. He looks like the protagonist in a film about a sleepy writer. “You see, my manners don’t start working until I’ve actually had my coffee.” He pours too much, and the liquid falls down the sides of his mug. “And apparently my coordination doesn’t, either.”

West is every inch the writer, editor and author he appears while in his pajamas. After many years in New York as an editor at W Magazine, West moved to Paris and became its European Editor. He then subsequently moved to LA, where he acted as West Coast Editor. He bowed out of full-time work to write his first book – Saving the Season – a narrative-driven guide to home canning, pickling and preserving, filled with memories (and recipes) from his childhood in South Carolina. Lately, West has been a co-creative director for the Grand Central Market – a vibrant, melting pot of food and culture in Downtown LA. Under West and co-conspirator Joseph Shuldiner’s suggestions, the market has rebranded itself, adding exciting new vendors and a contemporary feel that has breathed new life into a food-driven cultural center that has been operating since 1917. 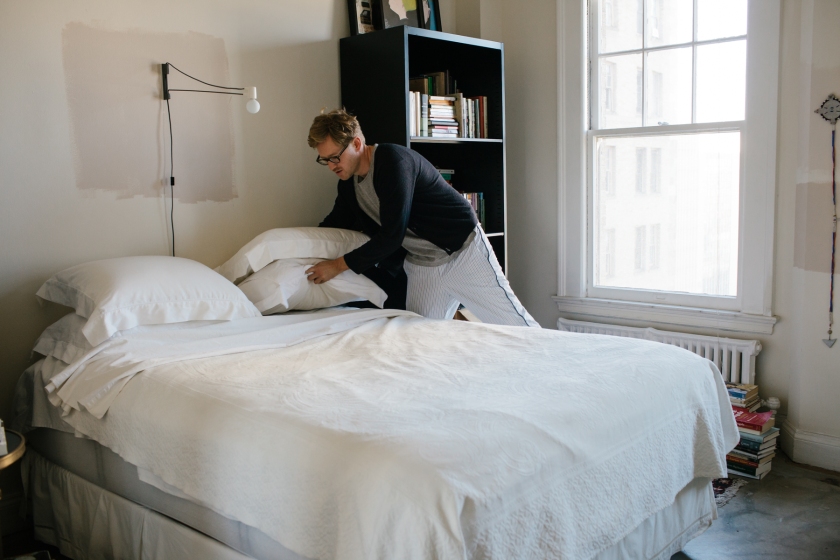 “Oh, it is so lovely to have this,” Kevin says as he sips his coffee and reclines in a leather chair. His apartment has an impressive, unencumbered view of Downtown LA, and every morning – after doing any leftover dishes from the night before – he sits and begins his day by reading. “I purposefully keep my phone out of reach,” he explains. “And I try to read for an hour, so I won’t be tempted to read later… you know, at 2:00 p.m. when I’m supposed to be giving my attention to something else.” West hops up out of his chair momentarily and returns with a notebook, explaining: “And whenever I have a thought, I run and grab my pad and pencil.”

After his read, West gets up and pulls himself together. He makes his bed (“this is the kickoff for me – the clock starts now”), showers, brushes his teeth and applies a dab of coconut oil to his hair. He then returns to the kitchen for breakfast. He serves Mortadella – cut into cubes and served with a loaf of country bread, several kinds of French cheese (“why use butter when you could use cheese?”) and some of his homemade preserves (quince).

One thing you can’t help but notice in Kevin’s house is his collection of books, which he calls a vice, but admits can be a valuable one: “I tend to be a little vague with details, so if I’m trying to remember something, I’ll come over to the bookshelf and skim titles until I remember where that information is located.” He smiles, stoops, and puts on a lovely pair of brown loafers. His feet click on the concrete floors as he leads us out the front door.

“When you’re freelancing, you have to figure out how to make a day – that’s when these rigid morning routines come into play.”

We’re at the open air Grand Central Market now, and Kevin is our proud tour guide. “Bon Appetit named us one of the best 10 new restaurants in the country,” he gushes. “But we’re not new, and not even a restaurant.” After stopping at many of the vendor’s counters to chat, he finds a permanent post at the counter at G&B coffee, where he pulls out his laptop – as he does most mornings. “When you work in an office, you get up and go, and that’s the structure of your day,” he says as he balances on his stool. “When you’re freelancing, you have to figure out how to make a day – that’s when these rigid morning routines come into play.” Kevin shakes our hands and shows us out. As we leave, we catch a glance of him tapping away at the MacBook, sleeves rolled up… A comfortable breeze hops by. We’ve seen more “rigid” mornings, but we’re sure he knows that.