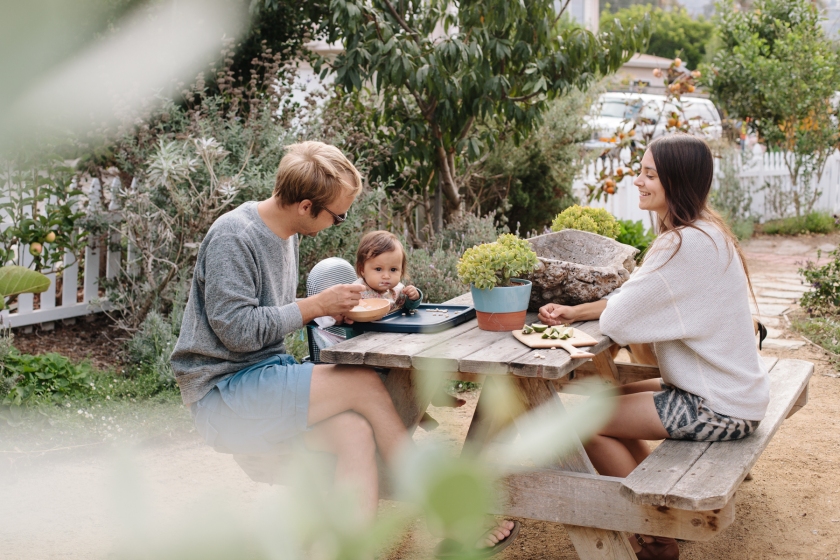 “My routine has completely changed since Anouk was born.”

It’s 8:30 and we’re standing in the kitchen of the Laguna Beach bungalow where David Rager occasionally housesits. He is making introductions. First, there are Max and Marie, the owners of the home. Then there is Rager’s wife, Cheri, and their doe-eyed daughter, Anouk. A large dog, Isabelle (“Izzy”) stretches out across the kitchen floor. As Max and Marie prepare to leave, and David tells us to follow him out to the garden, we’re about to find out what a morning looks like when it begins at someone else’s house.

Rager is a graphic and industrial designer. He grew up a few towns away, in Newport Beach. (Cheri is from nearby Dana Point). The pair recently returned to Southern California after five years living and building their interior design business in Paris. While there, they amassed an impressive portfolio, orchestrating the design of clean, bright restaurant spaces – Candelaria, Le Mary Celeste, Ten Belles, and many more – that leaned on their California sensibilities. “All the places we designed were totally selfish,” David says. “These were places we wanted to go.” Both David and Cheri plan to continue to keep a hand in their Paris work, while building a client base here in LA.

“When we’re housesitting [in Laguna], I’ll usually feed Anouk outside,” David announces and leads us into the garden. Perched on a picnic table surrounded by apple, peach, fig and avocado trees, David carefully spoons yogurt into Anouk’s tiny mouth. A barely-there ocean breeze swirls by. “This place messes with my reality,” Cheri says.

After breakfast, David escorts his clan to the beach. “My routine has completely changed since Anouk was born,” David explains. “[We both] used to work late and sleep late, now we’re up early with the baby.” Anouk plays in the sand as David keeps a close watch, tossing her in the air occasionally, to her delight. It’s high tide and the waves crash towards the beach, close to our heels. We make our way to The Stand – an “old school, Calfornia health spot” that hawks fresh juices, wheatgrass, and salads. Racks of animal rights pamphlets share shelf space with Bragg’s Amino Spray. David orders a fruit and vegetable smoothie, and sits for a long while under a large tree, enjoying it.

Back at the house, he lays out his shaving supplies – a safety razor (“I first bought one at a garage sale in the South of France – then I learned you get a hundred safety razor blades on Amazon for a few bucks… I never went back”) and olive oil (“It’s weird, I know, but it feels amazing. The razor gets clogged every few passes, but you just wash it out”). Because of the drought this summer in California, David limits himself to 3-4 showers per week, so after brushing his teeth, he splashes water on his face, and tells us he’s going to take Izzy for a walk.

“Instead of thinking of the big picture, we just try to create the best daily existence we can for ourselves.”

“When we lived in Paris, we learned to focus on simple things,” he says as the dog drags him along the sun-drenched avenues towards town. “Instead of thinking of the big picture, we’d just try to create the best daily existence we could for ourselves.” As for this morning? Mission accomplished. (Even if he and his family are only guests.) One of the best parts about moving back,” David laughs. “Is we’ll get to housesit here all the time.” 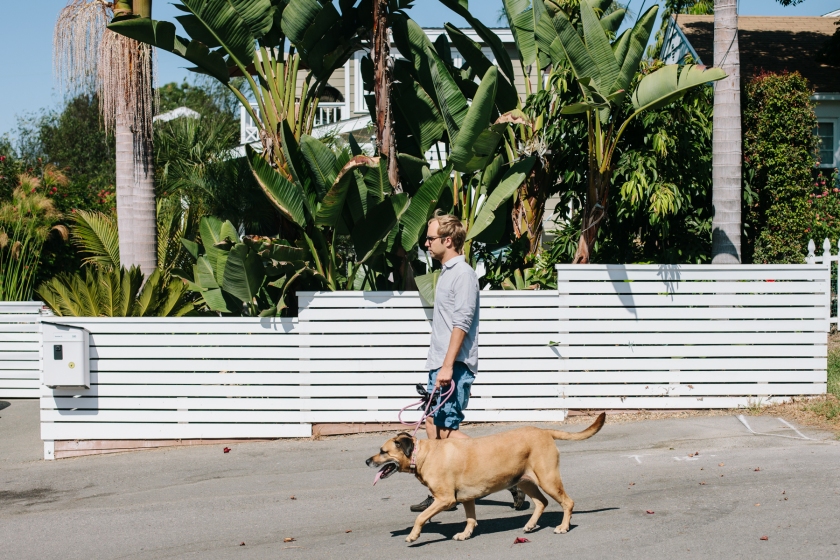