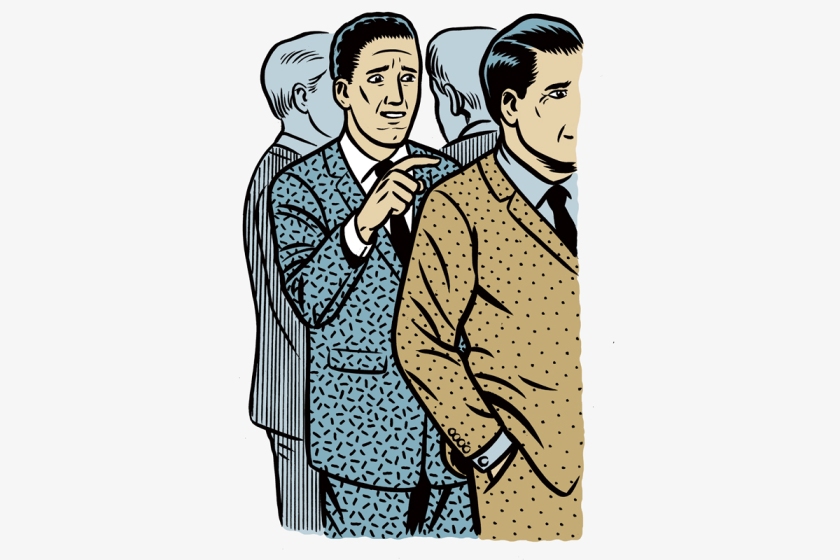 Jim Roach was a dashing gent who favored snap-brim fedoras and loved the ponies. We lived in the same town, and Jim was a member of the same club where I was working as a lifeguard—and dreaming of one day becoming a newspaperman. I guess I was walking around lucky when I found out that Jim was the widely respected sports editor of the New York Times.

Long story short: Jim was kind and encouraging, even when I’d interrupt his Sunday swims to talk about journalism. A couple of months before graduating from college, the Times offered me an entry-level job on the national news desk. I had also been accepted at Columbia University’s Graduate School of Journalism. I called Jim at his home to ask, the Times or Columbia? Jim was wary about advising me on such a crucial decision. A few minutes after we’d hung up, Jim called back and said, “What was I thinking? Take the job! It may not be there next year. Get your foot in the door.”

I took the job at the Times, setting in motion an exhilarating and rewarding career with stops at Newsweek, ABC, CBS, Time Inc., and ESPN. And all because it never occurred to me that Jim Roach wouldn’t want to counsel a young man who wanted to be like him.

See where I’m going with this? Don’t be afraid to seek advice from someone whose experience and expertise trumps yours. The most foolish mistake you can make is hesitating to ask for advice for fear of looking dumber than a post. According to recent studies from the Harvard Business School and the University of Pennsylvania’s Wharton School, the opposite is true. Which actually makes sense. People love to talk about themselves. Ask someone how he got started in his job or the secret to his success, and you might be late for dinner. Odds are, the studies suggest, he’ll be so flattered that you wanted to tap his wisdom, he’s likely to regard you as more competent, not less.

Warning: Ask specific questions about how to attain your goals—which means you have to know what your goals are. Sounds obvious, but you’d be surprised how many people are clueless about what they want out of a job and what they want to accomplish other than making a whole bunch of money. Think it through. Do your homework. Don’t waste someone’s time with questions that clearly indicate you don’t know what you don’t know.

Finally, a question for you. Got a best bud? Someone who’s always had your back? Someone who’s listened to you go deep into a personal problem and helped you come up for air? That guy. Talk to him. Lay your cards on the table. Even though he’s never set foot in your office, he just might offer you better advice than some assistant vice president who may have his own career to worry about.

When I was 26 years old, I was broke, jobless and doing my best to restart my life after a particularly rough, post-college stretch. I was doing some writing at the time for a website I had started, and happened to get an invitation to the Ralph Lauren offices in midtown, where I met a Senior Designer, maybe five years older than myself. We started talking, found common ground over a cigarette, and I left the offices that day with a job… well, an internship, at least. But it was Ralph Lauren – I had to take it.

And I’m glad I did. Over the next four or five months, I designed concepts, put together showrooms, researched old photographs. (I even sat in meetings with Ralph Lauren himself.) Basically everything a men’s clothing nerd like myself could have dreamed of at the time.

But more importantly than all of that, I observed the guys around me – especially this Senior Designer. I took every chance to hang around him. He sucked down Parliament Lights like he breathed air, and I was there for every one. I watched how he handled the higher-ups (smoothly), how he set his own agenda (freely), how he thought (spontaneously), how he spent his time when he wasn’t at work (simply). We ate meals together, traveled together… he was a tough guy to get to know, but he treated me like family. Needless to say, I admired him.

Here’s the catch – as I sit here today, I don’t remember a single piece of advice this guy gave me. But I do remember the way he lived; the example he set. One morning during that internship, I woke up and realized I had no interest in being a designer, so it was time to leave. But during my tenure I had spent so much time around this guy (and other guys like him) that I had an even more valuable tool than knowing what I wanted to DO. I knew how I wanted to LIVE.

This revelation made all the difference. I left that internship with a newfound confidence in myself. Just a year later, I scored what was then a dream job for me at GQ Magazine. (Guess who got me the gig? Another ex-Ralph Lauren staffer who I’d met through, you guessed it, that same Senior Designer.) But more importantly than getting the job – I moved to the neighborhood I wanted to live in, I worked tirelessly but always remembered to take time for myself, I lived simply, and I put myself in a good position to achieve the kind of goals I wished for myself.

Now, I know the idea of “picking the brain” of every remotely successful or intelligent person you can find is an enticing one, but let me suggest instead taking the time to identify someone, in the field you desire to become a part of, whom you admire beyond their work and actually get to know them. (Try offering to work for them for free – that’s a tough offer to turn down.) You’ll likely find that the most valuable professional lessons, (or life lessons, for that matter) aren’t learned over a breathless, thirty-minute sit down at Starbucks; they’re earned. That’s why they call it “quality time.”