“Since I’m going to be putting a helmet on, reconstructing the hair once I’m at work is the hard part.”

The exterior of the Brooklyn brownstone where Michael Prichinello lives is quiet at 7:00am, but inside things are already humming. Prichinello bounds to the door to meet us, (“Hello!”) trailed by his Boston terrier, Monkey. Monkey is seven years old, but “puppyish,” which is to say he has a lot of energy. As his owner gives us a tour of the apartment, it’s quite obvious where Monkey acquired his restlessness. 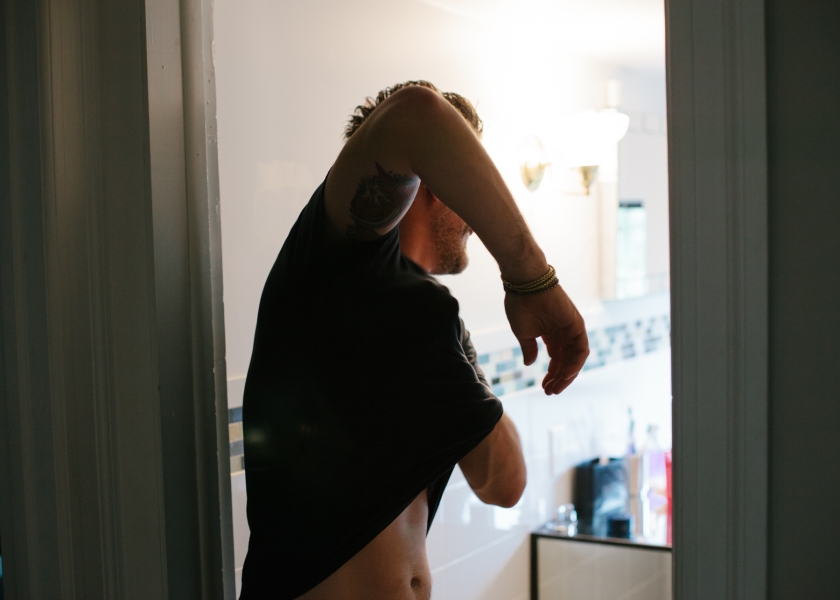 Prichinello is a marketer, entrepreneur and gear junkie. Back in 2005, he co-founded the Classic Car Club Manhattan with friend, Zac Moseley – their aim being to give fellow car-obsessed New Yorkers access to vintage rides without the hassles of ownership. He also has a now-decade-old branding agency to his credit, Modern Message.

As a brand man, Michael knows it’s easy to inspire others to “live the life,” but much more difficult to live it yourself. Michael lives it – racing cars and motorcycles on the weekends, commuting into New York (rain or shine) on a racing edition Ducati, and currently: beating us up the long, wooden staircase to the top floor of his house.

“For years, I lived in a loft in Soho,” Michael explains, “So having stairs is kind of interesting. They’re great cardio – I’ll be all the way downstairs, and realize “crap, I forgot my sunglasses…” Prichinello grabs his iPhone (he uses it to stream NPR in the bathroom) off the nightstand and heads towards the shower. “After I clean up, I’ll get dressed, put on a fresh t-shirt, throw some product into my hair” (Shu Uemura Shape Paste, from his wife, Kelly). “Since I’m going to be putting a helmet on my head, I never put too much effort into the grooming part of my day – reconstructing the hair once I’m at work is the hard part.” Michael does, however, have a strict deodorant allegiance: “Axe! I’m proud of it. I use the Kilo fragrance, and I really think it works. And then, of course, women fall from the sky…”

Once Michael is dressed, we walk the five blocks to Fort Greene Park, where he and Kelly take Monkey each morning. It’s hot, but Monkey shows no signs of fatigue, bounding after a rubber ball again and again. The next morning tradition is Bagel World on DeKalb Avenue. “We have three revolving breakfasts that all involve a whole wheat everything bagel,” Michael explains as Kelly goes inside to order. “Sometimes it’s eggs, sometimes it’s cream cheese…” The trio sits on a bench outside in the sunshine, eating. Back at the house, leather jackets, boots and bags start to pile up on the front porch as Michael removes the cover from his Ducati Hypermotard SP – he nicknamed it “Popcorn” for the pop-pop sound of the engine.

“We have three revolving breakfasts that all involve a whole wheat everything bagel.”

“This is the morning ritual,” he explains as he and Kelly suit up. Monkey moans through the window, unable to participate. On a hot day like today, Michael and Kelly’s rush hour ride into the city will seem lengthy, especially in their jackets (“We take DeKalb over the Manhattan Bridge. I drop Kelly uptown and then head back towards Soho.”). When Michael speaks of his evening commutes, however… “By the time I leave the office, it’s usually late, so it’s nice and cool, and the bridge is empty – I’ll be doing 100 mph. No one else is around.” He smiles widely and turns off into traffic.