Dad. Sox fan. Pack man. We go for a stroll with the STATE Bags co-founder in Carroll Gardens.

“I’m not sure I’ve ever spoken before 6:00 a.m., so this should be fun.” Scot Tatelman greets us at the door to his ground-level, Carroll Gardens home. He’s dressed for the gym. “Good morning, fellas.” 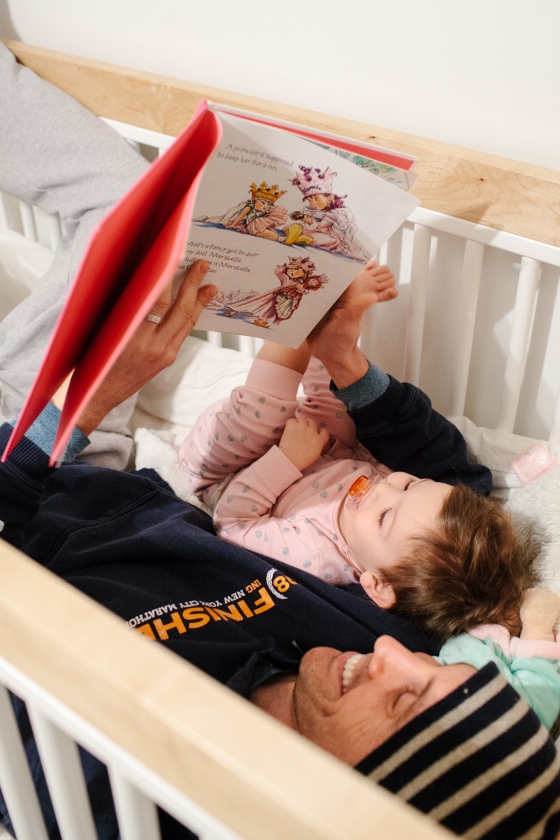 Tatelman and his wife Jacqueline are the co-founders of STATE – purveyors of stylish bags for both children and adults with an added component: the “bag drops” they host at underfunded neighborhood schools. It’s here, at these motivational rallies, that STATE comes alive: Scot and Jacq provide backpacks to at-risk children, designated community role models (“Pack men”) share stories and real-life advice, and a continued commitment to each child is pledged through STATE’s badge program. Scot has a background in both non-profit and marketing work. Jacq honed her design vision working for brands like Henri Bendel and Scoop. Together, they’re out to create a great-looking product with an even better message.

Union Street is dark as we cut across the block to Scot’s gym. Snowflakes are barely visible in the faint glow of streetlights. It is cold. “I usually hit the gym for 45 minutes, and then have some downtime to check emails and get a To-Do list going for the day,” Scot tells us. Back at the house post-workout, he jabs away at his MacBook at the kitchen table. His dog Pokey (named after former Red Sox infielder Pokey Reese – Scot is originally from Wayland, Massachusetts) stretches out on the couch. After some light work, it’s time to wake up Ayla.

As any parent of a young child could tell you, the kid rules the roost. And the Tatelman household is no different. Once Scot’s and Jacq’s daughter, Ayla, wakes up, their morning routine kicks into full gear. First, it’s story time. Today: Fancy Nancy. “Some mornings, I actually get into the crib and read with her.” Scot says. “Most mornings,” Jacq corrects him. “Sometimes I think he’d prefer to sleep in there.” After dressing Ayla, Scot, the stroller, and Pokey hit the streets for their morning stroll – a 4-5 block romp that ends at Mazzola Bakery where Scot orders Jacq a skim latte (he doesn’t drink coffee). Back at the house, Ayla helps Scot whip up a smoothie: coconut milk, banana, blueberries, strawberries, flax seed, chia seed and whey protein. The Band is playing on the home stereo. “This is the most exciting moment of the day right here,” Scot tells us as he presses ‘Start’ on the blender. It whirrs and so does a delighted Ayla. “Hey if STATE doesn’t work out, there’s always Smoothie King of Brooklyn,” he jokes. And the whole healthy family vibe extends to Pokey, as well – “I have a weird thing I do where I chew up broccoli and carrots and then kind of spit them into Pokey’s bowl. It’s easier than chopping.” 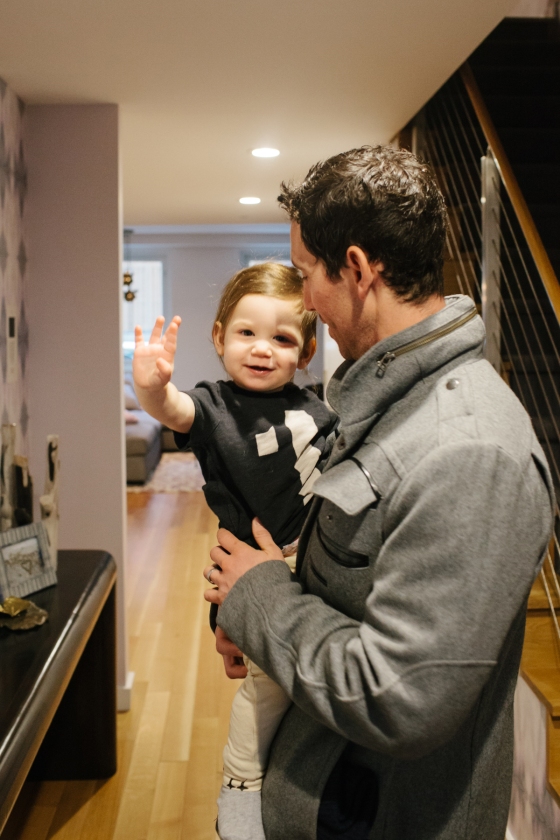 Finally, Scot hits the shower (“I shave once a week, it’s nice working for yourself”) before applying Malin + Goetz Vitamin E Face Moisturizer and Old Spice. “I’ve also been drinking warm water with lemon first thing in the morning. I’ve heard it really flushes out your system.” Ayla charges into the bathroom to hang with her dad and, before long, the six of us are standing in the bathroom together, watching Ayla apply moisturizer to Scot’s face. “This is pretty accurate,” he says.

“There are moments when I’ve been on the toilet, and the whole family has been in the bathroom with me.”

After getting dressed in a cardigan and jeans, Scot comes down the stairs and loads up his STATE pack for the short drive to the office. As Ayla and Jacq wave goodbye (Ayla is particularly enthusiastic), we take the short walk to the parking garage, and jump into Scot’s SUV. “Pokey rides shotgun,” he explains. Naturally. Scot leaves us on the corner. We trudge down the steps to catch the subway. It’s quiet. And two feels like an awfully lonely number.