“If I don’t have my daily peanut butter and jelly, I get grumpy.”

Chad Buri has a peanut butter and jelly sandwich for breakfast every single day. “If I don’t have it, I’m like grumpy.” He chuckles as he moves deftly around his well-lit kitchen. He’s working on making a second sandwich. This one is for us. It’s freaking delicious.

Buri is much more than a sandwich artist. He’s a creative force who has spent the past decade or so working alongside Andy Spade and his team at Kate Spade, Jack Spade and now Sleepy Jones – the luxe sleepwear/underwear/not-quite-ready-to-wear label started in cahoots with Spade’s creative agency, Partners & Spade, last year. And for a man who is starting a pajama line, Buri wears them pretty well. Today: blue with white stripes. Head-to-toe.

“So what goes into a Chad Buri PB&J?” you’re probably wondering. Well, the foundation is Matthews All-Natural Wheat Bread. “I don’t switch it up unless forced,” says Buri. On one piece of bread Chad slathers Smuckers Natural Chunky Peanut butter and on the other Bonne Maman wild blueberry preserves. Like Buri’s house it’s a study in simplicity done well, very well. The ‘70s Colonial where he lives is spacious, comfortable, reserved, made to live in. A fire roars in the fireplace (after a minor mishap with the smoke alarm – even that went off rather unchaotically). Three of his four young children are downstairs when we arrive, and almost on cue, have just expertly placed the final piece in a jigsaw puzzle.

Every day, Chad wakes up around 6am. He usually plays with his youngest, Jane and then showers (washing his hair about once a week). He then shaves with a soap and water lather and a Harry’s Truman razor, and moisturizes with Kiehl’s aftershave balm. “My wife has this ginger sea salt spray for her hair that I’m very envious of,” he laughs. “Every time she hears the spray bottle she gets a little mad.” Like any other suburbanite worth a lick, Buri then goes to the end of the driveway for the paper, which is wrapped in a blue plastic bag. He wears a massive duffle coat by British outdoor supplier Chrysalis. He drinks his coffee. The sun shines. All those involved in the shoot are mildly envious at this point. 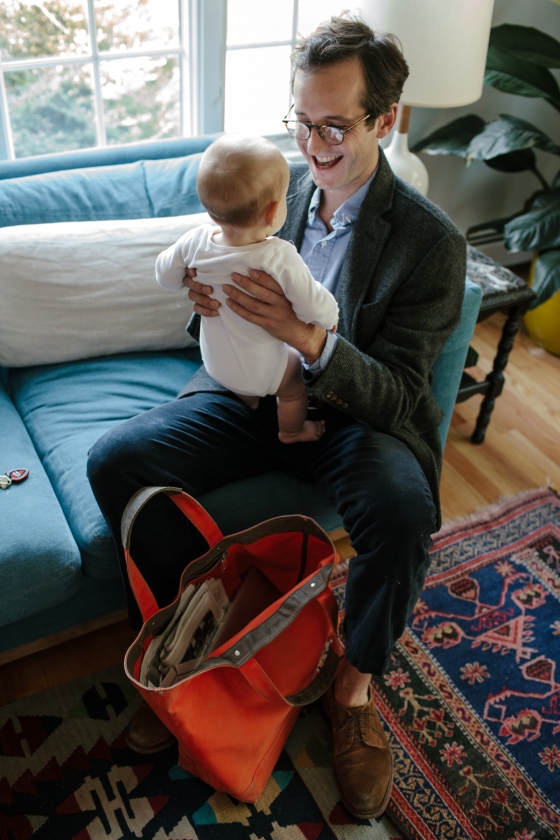 When he returns to the house, he puts on classical music (Glenn Gould and Bach), mostly for the kids. “If the kids have music going they won’t go zone out in front of the TV. You can see their minds start to focus more and they’ll go do puzzles or play chess or something.” Chad’s son Charlie has also recently taken up chess. The two of them will occasionally play in the mornings, sometimes leaving games going for days.

“If the kids have music going they won’t go zone out in front of the TV. You can see their minds start to focus more and they’ll go do puzzles or something. It’s pretty amazing.”

Chad then heads upstairs and returns in a tweed blazer, carrying his orange tote. It’s time to head to the train station where he routinely catches the 7:25 to Manhattan. He kisses and hugs the clan, and turns for the door. We follow. It’s time to part. We shake hands. Mornings aren’t supposed to be this civilized.